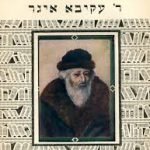 My wife recently told me that it took her years to figure out that Bracha Livatala was two words that contained multiple syllables. That got me thinking about the hundreds of words frum people slur into combinations that seldom match the original. Obviously, I don’t have time to go through every single instance in which 3 words are made into one barely recognizable word. I did however try to get to the 20 most commonly slurred words by frum people.

← A different kind of tefllin date
The Torah view of drones →

42 comments for “20 Most slurred words by frum people”