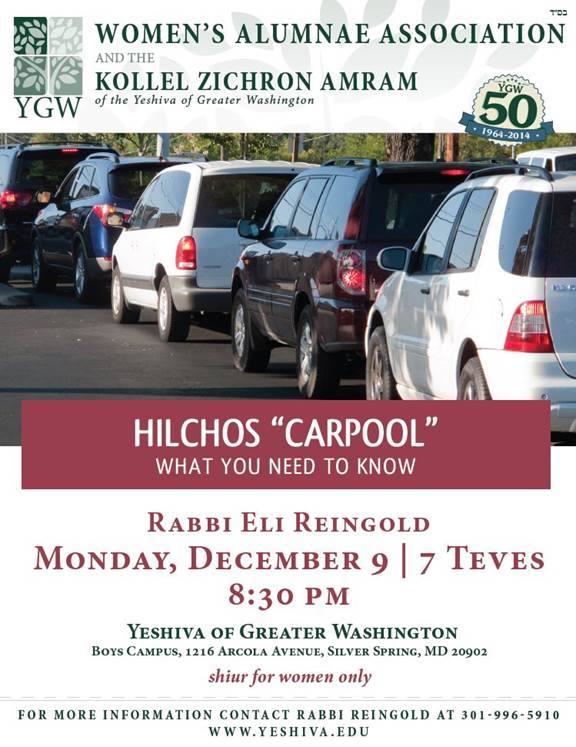 It’s unfortunate that our society has begun the downward spiral in morality, but since the beginning of time, each generation has had it’s own yetzer harahs and these days The Carpool has become a serious nisayon that we have only just begun to understand. The Carpool is one of the last places where boys, girls, men, and women mix freely without a mechitza or filter. The Carpool presents a major breach in tznius, yet somehow it’s gone unnoticed until recently. Rabbi Yair Hoffman started off a firestorm when he unearthed in shocking detail how the Carpool has become one of the biggest tests of our time, people were surely mad, but anytime something is true, people get angry.

Truth, nowadays, is always met with anger, and I’m glad that Rabbi Reingold has decided to give such a shiur. I’m not sure if everyone knows the exact danger of Carpools and I myself have asked my Rav as to whether or not I can use the Carpool lane lest people not eat by my house for fear of my mixing with the opposite sex.

My Rav gave a fiery shiur about this very topic in which he demanded to know how we can “separate children in school at such a young age, only to let them ride in the carpool without even so much as a mechitza.” He has a point, even though my modernishe ways will lead me to allow my children of different sexes to sit next to each other, I can understand how frummies would be disturbed by the notion. The hilchos carpool issue reminds me of that time they realized that many sheitles were made from mamish avodah zarah.

Carpools also force women to leave the home during the daylight hours, unfortunately, many animalistic men know of the carpool schedule and they tend to gaze at these ladies leading to harmful hirhurim. Unfortunately, these women rarely stay in their cars, they often go out to greet children and they often aren’t dressed in the best manner. I have even heard of women singing along with their children’s tapes, don’t they know that children get aroused too?

It’s really a terrible problem and I’m glad some of us are willing to speak out on the issue publicly. Of course there will be naysayers, the antisemitic negative Jewish bloggers will come out and claim it’s crazy, but in the end, Torah Jews speak out for what is right and sometimes people find it crazy. I’m a little bit surprised that such a modernishe community as Silver Springs is going to be the first to bring this breach in tznius to the forefront. I almost feel like I should ask them for mechilah for ever thinking they weren’t as tznius as those in more yeshivishe communities.

36 comments for “The Carpool is the latest breach in tznius”