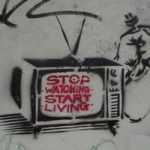 I remember when you could judge someone’s entire family over whether or not they had a TV in the home. It used to be that TV was the most important singular factor in what yeshiva, seminary, summer camp, or shul you went to. I remember when people snuck TV’s into their home using air conditioner boxes and hiding them behind the mirror or vanity in their master bedroom (my father an electrician, worked in many homes where this was the case). TV was not like the internet is, you never really needed it, you couldn’t find an excuse when the kids discovered that little black and white existed in the laundry room for the baalabusta who needed a break once in a while. It wasn’t easy to explain to your kids friends parents, that you would hide the TV when they came over. TV was and is still considered an evil, but no longer do people in the frum community or shidduch world ask about it. It’s become obsolete, because TV is automatically in the home now, pretty much everyone has the internet and no matter how many filters you have, the frum world produces videos and movies and shows and you will have access.

I remember thinking that the one family of cousins in Monsey who did have a monitor was more modern, turns out they were, their kids ended up in college and one of them only covers her hair partially, a shonda I tell you. Then there were those families that only had a monitor, but there was always some at risk kid in those families that figured out how to make the monitor into a TV. In yeshiva we had a monitor, that magically became a TV on Superbowl Sunday and reverted back to monitor during the commercials.

I remember thinking that TV was one of the few things in life that defined you, I used to brag about all the TV I watched, in the hope that I would not be called yeshivish (in no ones dreams was I ever yeshivish, shabbos morning cartoons ruined that image) I remember thinking negatively of those who didn’t have a TV, like they were closed minded or something, like they wanted to remain in their shells without knowing about the world, except what the Hamodia or Yated newspapers told them on Friday nights.

In my old age I’ve come to realize that when modern or secular people don’t have a TV, it’s not because they are stupid, ignorant, or insular, it’s usually the opposite. I haven’t had a TV since I moved out of my house at age 18 and don’t plan on getting one anytime soon. Sure, we have netflix and hulu, but I find TV to be addictive and a complete inactive waste of time. Fact is, that in the Bay Area it’s hard to find any Jew who has a TV, not because they watch so much of it online, but because the weather is nice and books seem to have more appeal these days. When I want to be brainwashed through media, I just tune in to NPR, their voices are so relaxing that it makes any traffic jam into a lullaby.