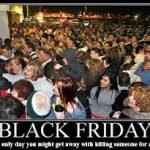 Stereotypes are usually fairly true in some respects, I would be more likely to call Jews savvy than cheap. Dans Deals basically sums up the Jew for you, we aren’t cheap, we just know how to score the best deals, work things to our advantage and we basically kick ass at finding loopholes. Kind of like that time my friend opened up a cash back credit card and bought $100k in newly minted coins from the US Mint and brought them to the bank. Black Friday is a distinctly goyishe holiday, Jews simply aren’t stupid or strong enough to have fist fights with crazy people for things they don’t need, at prices that can be had online if you look around enough. In my view, Black Friday is all the proof we need against the “Jews are cheap” stereotype.

The first time I heard about Black Friday I thought it was a joke, why would any decent person camp out for three days to “save” a couple hundred dollars on something they don’t really need. It wasn’t like we were living in a third world country and they were waiting for the UN food drop. It wasn’t like they needed that 64 inch flat screen TV for survival. Not only did I hear about people camping out (in my yiddishe khop the cost basis analysis was already ticking) but I started to hear about people getting killed in stampedes at Wal Mart and Target. Could anyone really save enough money on toiletries and video games that it was worth it to risk your life. You could turn on the news and see regular old upstanding citizens fist fighting over washing machines and crock pots. It was crazy, it reminded me that when shit really hits the fan (nuclear holocaust, followed by the Rebbe rising up from the dead) people are not going to band together to help one another.

Not only does Black Friday offer proof that Jews aren’t the cheap ones, it also gives us a glimpse at how people will act in the time of apocalypse. I guess Katrina gave us a small glimpse, but those were lower income people so no one paid attention, but Black Friday is mostly regular people who are on a rampage to save money. Black Friday is the capitalist/consumer society at its worst, people literally turn into animals.

As far as I know, you don’t hear about such Black Friday madness at Eichlers or B and H. I just can’t imagine a bunch of folks killing each other for the free shabbos lamp door prize. I wonder if there were Jews that fought over the mini artscroll shas and were caught on camera pulling at each others peyos and beards. Were Jewish ladies fighting over the latest in shevy wigs, or trampling each other at sushi deals? I’m not sure, I also wonder if the Black Friday madness that I’m trying to prove my point with, only exists in white trash areas or do regular old prius driving suburbanites get into fights over wooden salad bowls at Crate and Barrel.