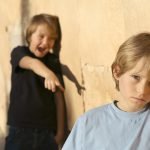 I was bullied right up through the 7th grade because I stuttered and didn’t have a mother. This probably explains why even in the most serious situations I have to crack jokes and make fun, it also may explain why I’m an extrovert, because I didn’t talk much until the age of 14. If I did talk it was painful, this was the late 80’s and early 90’s, way before any sort of political correctness and niceties among children. Kids were mean, they just didn’t take to the internet, they taunted and hurt your feelings the old fashioned way. To your face, beyond your back, mimicking you, wondering aloud why you couldn’t speak and yes, it sucked.

Instead of running home to my parents or complaining to teachers I fought back.

I’m not exactly sure when it first started, but after I hit that first kid in the face with some sort of object, I couldn’t really stop. You see, I grew up in a time when kids getting a little bloody was still accepted. The schoolyard brawl with some wrestling, choking, fist clenching, and cussing was on its way out, yet it still existed. I’m not sure how I would have reacted if I was made fun of on the internet, if people made fun of my single parent home and speech impediment in a more public place, I may have reacted differently. However, I thank God that I grew up in a time where it was perfectly acceptable to smack a kid in the face with your He-Man lunchbox and be sent to the principals office, rather than to the therapist.

Don’t get me wrong, I ended up in behavioral therapy for other reasons, cursing out teachers, telling Rabbis to screw themselves, and being a general letz, but smacking kids in the face with tennis racquets and lunchboxes was generally done when the bus let out or in camp. I guess it’s a good thing I wasn’t in public school, because in my neck of the woods they all had metal detectors for a reason. It’s also a good thing that my stutter magically vanished at age 14 and developed into a fine young man who could speak in public, but I’ve begun to wonder if kids have become too pussy to fight back against bullies these days.

In yeshiva there were some bullies and I steered clear because they were bigger than me, I avoided them because of the size problem, I didn’t want to get into it with anyone I couldn’t handle. The last time I hit anyone in the face was when I was 14 I smacked some kid with a half empty two liter bottle. Not sure what brought that on, but in my adult life I generally shy away from any type of fighting, unless it involves middle fingers waved at slow headless prius drivers in the fast lane.

I still wonder if the bullying would be as bad if we hadn’t developed this anti-man liberal policy of peace. It seems that a little self defense will do these kids some good, although most of the kids getting bullies are probably going to be pussies even if they knew how to fight. I didn’t know how to fight, I just knew that I wouldn’t pick on any kid if the threat of a lunchbox to the face existed.