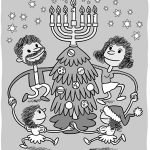 I didn’t know from this Chinese Food Christmas minhag until I first met non-religious Jews. All I can remember from the Christmas of my youth is asking our doorman if we could take candy canes off of our lobbies tree, smelling the sweet pine scent from the trees being sold on Broadway, and wondering whether it was our families minhag to say Xmas or Crochtzmas. When I first heard about the minhag to eat Chinese Food on Christmas it made no sense to me, yet everyone told me that their families have been doing it since they came to America. Upon further research, I found out that Jews who didn’t keep kosher had nothing to do on Christmas eve and since it was their minhag to eat treife, they couldn’t find any restaurants besides Chinese that were open on the yuntiff.

This reminds of the time I was in Ohr Someyach on Yom Kippur, my roommate and some other kids were starving and since everything was closed in Jerusalem, they decided to hit up East Jerusalem in search of some open places. I assume that whoever didn’t become a super frummy from the Ohr Someyach indoctrination program, still keeps this as their Yom Kippur morning minhag. However, as we can see with eating Palestinian cuisine on Yom Kippur, Chinese Food on Christmas is not a frum minhag. It was obviously created at a time when there was little kosher food available, because as far as I know, all kosher restaurants are open on Christmas.

For many Jews, eating Chinese Food is one of the only obviously religious things they do all year, so maybe we should let them pound treife food in an effort to stem assimilation and intermarriage. After all, there was a subsection of the Pew Survey that made it clear that those Jews who ate Chinese Food on Christmas were 3 times more likely to marry Jewish than those who ignored the tradition. Those who ignore the tradition are more likely to celebrate Christmas in some way and that will further remove them from the Jewish people.

While it’;s fairly obvious to see that frum Jews are probably not eating Chinese Food on Christmas, it isn’t right to simply brush off this important minhag. Just because something isn’t necessarily frum, doesn’t mean it’s bad. May we be zoche to see our frum brethren more accepting of not necessarily frum minhagim.

← Knockout game may be racist, but God forbid we say it is
I was bullied as a kid and I just fought back instead of complaining →

21 comments for “Eating Chinese Food on Christmas is not frum”