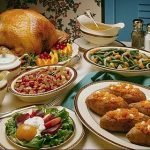 Thanksgiving is one of the few goyishe holidays that is actually a debate in the frum community. Unlike most other goyishe holidays, Thanksgiving is a new world holiday and therefore there is some sort of mesorah to celebrate it. It is a minhag klal within the Modern Orthodox world and those black hat on shabbos types who are more open minded. Yeshivish people who have a mischievous side are known to make Turkey for Friday night. Very frum people will generally tell you the classic “everyday we thank God” and that they don’t need to acknowledge some goyishe made up mishegas. However, this year is obviously different, Chanukah and Thanksgiving falling out on the same day have filled up the internet with lots of crappy videos, songs, and jokes, but the real question is whether or not frum people can retain their status of “really frum” and still get away with having turkey on Thursday?

I like the concept of celebrating Thanksgiving, but I’m not machmir about it. If the people (blog readers who live near Yosemite) I happen to be spending that shabbos with have the seuda, I will gladly stuff my face with cornbread stuffing, cabernet cranberry sauce, and deep fried turducken. If they don’t have the meal, I won’t leave in a huff complaining about their lack of hakaras hatov to the United States Government killing off the Indians. In yeshiva they used to tell us that Thanksgiving was sort of ok, but that it really wasn’t proper for yeshiva guys. It wasn’t an all out ban like that against Easter or Yom Ha’atzmaut, but it was a gentle way of saying that the yeshivish world didn’t really give its seal of approval for Thanksgiving. There are yeshivish people who do celebrate it, but those people always feel the need to brag about their mesorah or tradition, and most of them don’t really go beyond the letter of the law by having creamed pearl onions, scalloped potatoes, and orange walnut cranberry sauce.

I wonder if those who’ve never done Thanksgiving before, will take a crack at it this year? There is plenty of oil to be had and you can make it so it happens on Thanksgiving day and chanukah, because chanukah is technically not until that night and Thanksgiving seudas are usually set for around chatzos. Imagine having a menorah candlelit desert, ever eaten pecan or pumpkin pie while singing maoz tzur? Or would that be a maris ayin to those who think you are treating Thanksgiving like a proper yuntiff, when it is just a day that the goyim who secretly want to kill us at the first chance they get, have created.

There are many people who dismiss Thanksgiving and say that it’s a lot of work for something that will just happen the next day, but I’m not sure if those people know about the post Thanksgiving menucha that happens on couches worldwide. Thanksgiving meals produce such good naps that don’t end with someone waking you up for shul. There is something special about having a big meal with no kiddush or divrei Torah, according to pirkei avos it is a meal of scorners, but it’s really just a damned good meal. No matter how bad the food has been, I’ve never had a bad thanksgiving meal.

22 comments for “Will frummies finally celebrate Thanksgiving this year?”