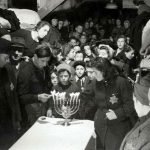 As much as I want to believe that I can move past labels and stereotypes within the Jewish community, there’s no way around the fact that I am Orthodox. Sure, I miss z’man krias shema on a daily basis, don’t have a negel vasser cup next to my bed, and don’t have a shas on a cherry bookcase surrounded by silver besumin boxes, but my way of life is guided by the Torah whether I like it or not. I would venture to say that I’m a spiritualist, a post denominational chossid. Yes, I’ve been inspired by Jews of all streams, I’ve asked shayala’s to Conservative Rabbis and I’ve drunk wine that was touched by kofrim, I’ve even driven on shabbos a few times, but in the end I cannot claim to not be Orthodox just because I want to be cool and throw off the negative connotations that labeling oneself Orthodox brings with it.

If you get up in the morning, wash negel vasser, throw down some asher yatzar and put on tefillin you’re not necessarily Orthodox. There are plenty of non-Orthodox Jews who do the same, who go to shul three times a day, who do all the regular things that we Orthodox Jews do, yet affiliate with a different stream, but we all have to admit that it’s becoming less and less common. I’ve met plenty of Conservative Jews that smelled like Modern Orthodox Jews to me, yet they “belonged” or “affiliated” with a Conservative shul. They wore their talesim correctly, kept kosher, kept taharas mishpacha, yet felt that Conservative theology, treatment of women, and general atmosphere suited them better. I completely understand, I actually like Conservative theology, but similar in vein to the way that Torah Im Derech Eretz and Centrist Orthodoxy are not practiced how they should be, Conservative Judaism also seems to have lost touch with its roots. I’m sure Conservadox still exists, but it’s rare to find Rabbis who don’t drive to shul or keep fully kosher.

I would like to ask those who are trying to do away with labels such as Orthodox, Conservative, and Reform, whether or not they hold of each others practices or conversions. One of the things that probably divides us most, is our unwillingness to accept non-Orthodox conversions. 95% of Orthodox Jews that I have interacted with will never hold of a conservative conversion. I have trouble with that, I would never call someone who converted via the Conservative movement a goy, it’s troubling to me and I’m willing to bet that all of these phonies calling themselves “not orthodox” would have no trouble with calling a conservative convert a goy. None at all, but I do, I have trouble with it, yet I’m still going to myself Orthodox.

I’m still going to call myself Orthodox, even though I’m open minded towards many types of Jews, I’ve done some very distinctly non-Orthodox things. I’ve done things that would make people who are trying to abolish the label Orthodox, cringe. Would those people daven mincha or even step foot into a reform gay synagogue? I think not, I call phony once again, yet despite my labels, I try to transcend those labels. I try to judge everyone harshly, yet equally. I try to have disdain and negative things to say about chabad, women of the wall, satmar, re-constructionist, humanistic, and yeshivish. No one is going to escape, if you’re part of the Jewish community, I’m going to judge you, make fun of you, and make you rethink your position.

There’s a frightening trend within Orthodoxy and that trend is that our own Orthodox are beginning to try and distance themselves from Orthodoxy. It’s hard to do that when you are Orthodox. You can write articles claiming that the media doesn’t know anything about your sect, but in the end, the change has to come from within. The secular media cannot be convinced of your open and free society if it doesn’t exist. It’s as if distancing yourself and your open minded views from this scandal ridden frumkeit is just the opposite of what we need. I wish these people who are trying to claim they aren’t Orthodox, would take their views and say “I’m Orthodox’ yet I hold hands with my other Jewish brothers and sisters. I wish they would say, I don’t judge them based on what they hold, I judge them based on who they are as people. Instead of throwing our the label, embrace it and try to change the image from within. If all of these folks who even have the hava minah that Reform and Conserative and Renewal Jews are part of the greater Jewish community, embrace those Jews as an Orthodox Jew and be yourself.

I am Orthodox, yet I don’t purport that everyone should be. I am Orthodox, yet I believe that other Jews can practice as they wish, I do not want everyone to become Orthodox. Orthodoxy is my way of practice, you have yours. I do not claim to be non-Orthodox, because I wish to join this post-denominational trend. I hope we can be proud of ourselves without trying to jump ship when the water gets rough.

60 comments for “I am Orthodox”