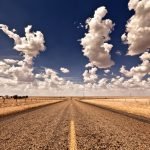 I’ll be the first to admit that California and all of the great things that happened to me once I moved here has changed me and my perspective. The change didn’t happen immediately, I first had to shrug off years of yeshiva, hatred of New York, hatred of the large frum communities back home, and a general disdain for anything I deemed as “frummy”. Sometime in my first year here, people started emailing me and complaining that I had lost my edge. Damn right I lost it, I stopped hating my self, my life, my community, and my people. I discovered this wonderful community of Jews that didn’t even have the hava minah to care about what I wore on shabbos, who I voted for in the past election, and what I was doing to take myself out of single-hood.

Initially when I came out here, I didn’t plan on staying. I was dating someone back in New York and when she broke up with me I still wasn’t sure what to do. I was broke, living in an office building, and working in a job I didn’t really like. It seemed like I discovered my cooking career and my love of Northern California at the same time. The blog suffered because I had too much to be happy about. I had to work harder and harder to find things to be angry about. I’m not sure if I can convey to you all how much of a non-angry guy I have always been, but California took any sort of bitterness about shidduchim and frummy judgmentalism and through it out the window. The other thing that it gave me, was this amazingly postive outlook on life and the ability to not take myself so seriously.

There is a certian arrogance that comes with blogging, I’ll be the first to admit that I had some pretty arrogant stages in blogging, but I was quick to be ousted and told not to take myself so seriously. Arrogance is almost key to running a good blog, but I’m bad at it because in the end it’s all about fun. If in the process of having fun I make someone smile or think in different way or become a better person, that’s great, but fun is the ultimate goal.

I generally don’t write personal posts (though I get requests to do it) because I find that my personal life may be exciting to me, mountain biking, professional cooking, and gardening are not exactly things that folks want to read about on the site. I also find that my personal views (did you think I actually agree with what I write) and ways of practicing Judaism aren’t interesting enough to post about.

I’ve been kind of mad at myself lately to commenting on all these scandals, I personally view it as a cop out. Scandals are too easy, I always prided myself on being clever and I almost feel that frum scandals are not at all clever. My whole thing was trying to elevate our mundane every day practice into something funny. I’m not even sure what the point of this post is. Once in a while I feel like venting to the readers. There’s a certain comfort in knowing that someone will read this and “get” it, I’m not sure that I even get it.

It’s kind of like, I don’t want to be just another commentator, but I kind of do. I like the role of social critic and community analyst, but it’s hard to ignore the events that are dividing the frum community. It’s hard to just make fun of our silly ways, when there’s more serious things abound, yet I wish I could ignore them. They sort of affect me, in a global Jewish sense I can see the frum community imploding. There’s this general need to rationalize what we do as religious Jews, but for me it’s not rational, it transcends the rational and it’s about faith.

But faith and science and modern day life doesn’t mesh. Orthodox Judaism is going through an enlightenment of sorts, a new haskalah, but I don’t like it much. However, I can’t stop it, I can’t control those who wish to discover the “truth”. It’s a hard force to fight against, but the thing is I don’t really believe in fighting against it. I can see those who fight against it, fall into the trap of rationalism. I call it a trap because the eventual end is to become arrogant and fight against us non-rationalists.

I myself have been caught up in this enlightenment, I’ve begun to appreciate all Jews, not only religious ones. I’ve begun to understand the draw of different streams, but I remain true to my irrational frummies. I don’t blame the rationalists, I would become one if I could get through some of the rationalist reading lists, but I’d rather read wilderness writing than philosophy and I don’t blog for a living, just for fun.

Oh yeh, it’s supposed to be fun, I give you all a bracha that you don’t forget the joy of the internet. Don’t get caught up in all the hate (which I definitely throw around once in a while) I’m just sorry I can’t be as hateful and negative as I used to. It’s more forced now, I’m a happily married man, I work full time, I spend inordinate amounts of time wandering the trails of northern California. It’s hard to be negative when things are good, thank God for Facebook and frum forums. Oh and our ever growing supply of second hand mishpacha magazines, a wealth of material.