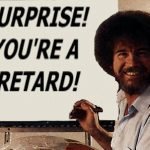 Orthodox Jews are not known for their political correctness, in fact many of us are downright racist, homophobic, women haters, and have a general disdain for anyone who is brown and not Jewish. I’m not sure it happened that Orthodox Jews decided they weren’t a minority and became avid right wing nuts, but it happened. Before Obama was elected you could see the racism outright and the responses such as “before I moved to Baltimore, I wasn’t a racist” all over the place. However, the term Retard is one of the few that evokes emotion and offended people within the frum community. My two favorite terms that weren’t derogatory when I was a kid are “Fag” and “Retard”, unfortunately I can’t use them anymore and I’m fine with that, unfortunately there are still people that insist on breaking the rules of political correctness and being assholes.

My wife said something very important to me amidst my anger that Retard and Fag should be brought back (at least into the blue collar professions) and that is that political correctness is about being kind to others. It’s not about whether it offends me, it’s about whether it offends a large group of people. Of course, this reasoning would mean that Douche may be on the endangered words list, I just hope Douche doesn’t become non-politically correct in my lifetime.

Isn’t it interesting how Orthodox Jews are so against being politically correct until it comes to something that offends them? Or is it like that with everyone? I think the reason Retard is so offensive is because through our inbred society we have created a high percentage of folks with disabilities. I guess it has also allowed us to create amazing programs like Friendship Circle, Chai Lifeline, and Camp Simcha to support this amazing community.

The only reason I bring this up, is because Rabbi Fink’s FB wall was filled with almost 1000 comments debating the offensiveness of the term Retard. Of course, it was filled with name calling and lots of hatred, but I did find it interesting because I truly love the word Retard and was very sad to see it get taken off the acceptable non-curse words list.

← Is it fair to judge Orthodoxy by scandal?
Chassidish Feminism →

18 comments for “Does the term Retard offend you?”