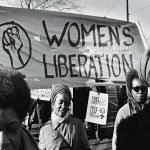 Lately there?s been a lot of chatter about the plight of the poor frum woman, the poor oppressed frum woman, “oy, they have to sit in the back of the bus” “women can’t be rabbis or rabbas or yoatzei halacha” “they’re not allowed to hold public office” etc. etc. ad nauseam, soI?d like to address that.

There?s a big misconception among people who didn’t study feminism, namely that to be a feminist a woman has to practically become a man. Real feminists, we?re told, want to be firemen and construction workers. But this is only true of the goyishe feminists, who are actually deluded, sad people, people who end up regretting their entire life’s work when they’re staring down the malach hamaves on their deathbeds. There’s a better kind of feminism though, chassidish feminism. I’d like to thank the people who put out this video for helping set the record straight on the nature of chassidish feminism.

Real feminists understand that the truest expression of their feminism happens when they follow the chassidishe toireh and allow the creative power of childbirth to take place. Being a firewoman? Where?s the feministic creative power in that?

To understand chassidish femininity you have to read the book called The Secrets of Jewish Femininity?. You don?t have to read it actually; I mean it?s all in the title. Like everything else in the toireh, Jewish femininity isn?t readily understood, it?s a secret treasure which only gives up its secrets after one spends ?years of shtayging in yeshiva, and only then after one consumes mountains of Aish propaganda.

Now I know that this can be a little confusing, so bear with me. You see, it?s only confusing because your mind is warped by all the traifene messages you heard from your English teachers in high school, which, incidentally, the fact that chasidish kids don?t do English beyond the 4th grade level is why chassidish kids have so much more of a pure Jewish outlook on life. You may think that when the Pat Robertson of the frum world, Rabbi Amnon Yitzchak, paskens that women aren?t allowed to drive you can finally point your accusatory finger and say ?you see? This isn?t feminism, this is misogynistic patriarchy!? but you?re confused. Contrary to the fake feminists of the goyishe world, frum feminists understand that in order to reach their true feminist ideal they have to listen rabbonim who know better than themselves. Just because they?re feminists doesn?t mean they?re idiots, right? They understand their limitations, they know that they?re prone to making hasty, emotion based decisions, which the toireh is very against. So they selflessly (and very feministically) suspend their feminist natures for the sake of their husbands and communities.

← Does the term Retard offend you?
Shabbos Toilet Paper →