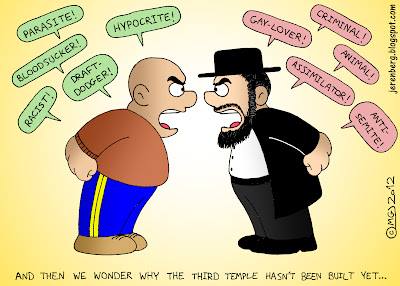 This past shabbos, the Rabbi spoke about how “frum scandal” is the new yetzer harah, he spoke about how the frum scandal is used an excuse by people who don’t want to grow in their yiddishkeit. He’s absolutely right in that context, people wrongfully generalize entire groups of people based on the faulty actions of a few and this was and is the case within Judaism as well. I always like to say that we shouldn’t judge Judaism by the Jews, but how does one respond to entire communities embroiled in scandal, Jewish leaders supporting criminals, making parties for convicted sex offenders, and supporting those who refuse to give Gets? Does the growing support for those who victimize others allow the judging Judaism by the Jews to begin? Have we entered a new era for the yetzer harah, or are we just now discovering that the pen, the video camera, and the internet have finally allowed the laymen to fight back against the entrenched establishment?

I’m not sure how many would agree, but I don’t think there’s anymore scandal nowadays than there was 50,100 years ago. It just seems that there is more dissent from within the community, there is a growing concern among frum Jews that the community is imploding from within and this is probably thanks to the transparency that the internet and web user generated content allows. Before the invention of self-media, the heimishe newspapers pretty much controlled the opinions. God forbid would we ever hear that the gedolim weren’t direct intermediaries of Hashem himself. There were never riots, only rallies, and anyone who sought to undermine Orthodoxy was never from within Orthodoxy itself.

While I don’t think liberal Judaism (non-Orthodoxy) can survive, intermarriage and egalitarianism (and the general thought that liberal Jews and liberals are almost exactly the same thing) I’m not so sure that Orthodoxy and Ultra-Orthodoxy can survive the internet and the dissent from within. It seems that the internet (lets face it, pretty much everyone has it whether they lie about it or not) has probably ruined the Chassidic community forever, it doesn’t allow total insularity and it’s easily hidden. Ultra-Orthodoxy can only survive if it can keep insularity alive, it has to be almost like North Korea in its preaching against the secular world and I think it’s slowly unraveling. The black hat community likes to think of itself as the true practitioners of authentic Judaism, but did Judaism of 200 years ago resemble Lakewood in anyway? Modern Orthodoxy seems like true winner, but due to the lack of centrists it seems that Modern Orthodoxy will fade into Yeshivish or Open Orthodoxy which doesn’t seem to be growing at all.

Now don’t think for a second that a few scandals will tear apart Orthodoxy, because it won’t. It’s not the actual scandals that create the yetzer harah to throw off the yoke of Orthodoxy for most, I think it’s the general attitude in the frum community toward scandal that allows the scandal to have a far reaching effect. There still remains a large majority of frum Jews who do not trust the government, police, or legal system when it comes to anything. There is a general unwillingness to talk about matters relating to sex and this includes the ever present problem of pedophilia. The growing scandals seem to be growing at equal speed to the insistence on an ever increasing extremism towards “modesty” and “tznius”.

The more taboo, passe, and non-rational that religion becomes in the eyes of the “western world” the more Orthodoxy will be targeted by the cultural and irreligious media. I think there’s a general fascination with anything considered “extreme” and religion in one of those things. Religious people are wrongfully thought to be more pious than the rest of the population. When people throw around statistics of religious folks visiting prostitutes or strip clubs I’m never surprised and I just view news stories of religious people being caught red handed as sensationalist. The increasing articles about the wrong doings of religious people shouldn’t be used as a reason not to practice religion. Religious people and non-religious people have the exact same desires. Just because you wear a hat and peyos, doesn’t mean you don’t want to look at naked girls and cheat on your taxes, it also doesn’t make it any more right or wrong than the regular secular person doing those things.

I think we ought to stop judging religious people on their faults and desires. We ought to stop assuming that religious people are any more or less moral than secular people. If we were to start thinking like that we would probably be able to be better Jews because our religious practice wouldn’t be dependent on those “extreme” people being extremely moral and righteous as well. It’s as if the yetzer harah has convinced us that peyos and beards can change a persons morals and ethics, so that if they do something wrong, it’s an excuse for us to stop being good Jews. Of course, this may translate as “gedolim are regular people” and you may consider that kefirah. If that’s the case, you ought to listen to the cherem against me.

← Stuff Frum Pedophiles like
Does the term Retard offend you? →

30 comments for “Is it fair to judge Orthodoxy by scandal?”