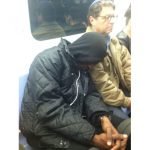 The last few years have been unkind to Orthodox Jewry, rising chillul hashem has all but erased the public kiddush hashems that once graced us by the boatload. We have sunk beyond depravity into a world where insular leaders protect child molesters, fraudsters, get with holders, and anyone who looks Orthodox, but doesn’t have to toe the line of honesty. This is why some are calling the Kiddush Hashems of the last week a reason to be joyous, while others are calling it a conspiracy. First we had the train man and then we had the desk man, whether or not they are real, they are the first times in many moons that Orthodox Jews have looked good to the public eye.

The train man was obviously real right? How could someone so ehrliche and trustworthy as Isaac Theil be part of such a Kiddush Hashem conspiracy? Could he have been taking those words spoken about Obama by rabonom before his election? You know, the part about the nation of Cham being our slaves, that man was a slave to his shoulder, leaning against him for support and someone may have “happened” by to take a picture. Lots of other pictures have been proven to be fakes, why not this? Two kosher aidim were not present and therefore I’m hesitant to believe in the validity of this kiddush hashem. I guess the world was duped because typically those wearing knitted yarmulkes are more trustworthy than those in black velvet. If he was wearing a black hat, it would have not been believable at all.

That brings us to the second kiddush hashem of the week, the man who found $98k in a desk he bought on craigslist. From all that I have learned about yeshiva rebbes, I’ve been less likely to trust them than anyone else in the world. Sure, they’ve gotten a bad rap, but is it just a coincidence that he found the money months ago and mulled it over until it was a good time to go public. Could it be that Isaac Theil and Rabbi Muroff worked together? Could it be that there’s some sort of marketing scheme to reverse the negative view that pretty much everyone has about Orthodox Jews?

The last multiple kiddush hashem episode I could remember is when Jews of all stripes came out in support of the obvious antisemitism perpetrated against Rubashkin. I also recall that the Internet Asifa was a great show of unity from the Jewish community that we rarely see make the news, but those events were not at the same time. Can anyone recall two kiddush hashems that happened at the same time.

← My Unique Shabbos Experience in Brooklyn
Is saving your virginity worth it? →

9 comments for “Record Breaking Two Kiddush Hashems in one week”