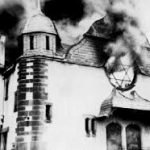 If one were to glance around the frum news world on the 75th anniversary of Kristallnacht, one may have noticed a dearth of reporting on the subject. I’ve always wondered about the frum worlds lack of Holocaust talk, but I never really noticed it so blatant as I did over the weekend. Thousands of Jewish owned business, shuls, and buildings were destroyed, yet nary a mention of such an important anniversary. I remember back to the rabbis in yeshiva telling us that we don’t recognize Yom Hashoah, because it’s not frum. The last time I checked, we were all Jews and the Nazi’s didn’t ask people what their kashrus or tznius standards were before they sent them to their deaths.

Admittedly, some Jews seem to spend a bit too much time on Holocaust remembrance, but can there really ever be enough time spent on the most horrific event to befall the Jews in modern times? How can a large group of Jews just ignore the Holocaust? How could it be that out of every major Orthodox Jewish news site, VIN was the only one with any sort of “out of the ordinary” mention? I was taken aback to say the least.

Could it be possible that since Kristallnacht was centered in Austria and Germany, that many of those more shtetl oriented Jews don’t care? Is it possible that since it’s likely that many of those Jews who lost out on Kristallnacht were not frum and therefore the frum world chooses to ignore it? I just wonder if these horrible thoughts could be true. I find it horrible in the first place that the frum world doesn’t join hands with everyone else and remember the Holocaust on the same day as most of the Jewish world. I find it hard to believe that the excuse of Tisha B’Av being the day of Jewish mourning has carried on. Don’t these people realize that it’s important to unite under Judaism once in a while, regardless of whether your philosophies mesh.

The Holocaust could be such a uniting feature of the Jews, but it seems to be too modern for the frum world.

← The Bris Anthem
Could there ever be an Off The Derech shul? →

9 comments for “Is Kristallnacht too modern for the frum world?”