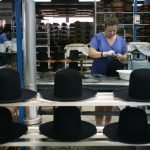 The Rabbi gave a little talk on Friday night about how Jews should look respectful in public, he spoke about how Jews shouldn’t attract unwarranted attention or look weird. He said that looking weird, or wearing something odd can be considered a chillul hashem. Naturally, I felt the need to tell him that in general, outside of Lakewood, someone wearing a black fedora looked weird. Could black hats be considered a chillul hashem? He said it was a good question, I saw some of the more questioning members of the shul nod in agreement and the Rabbi said he would answer me later. He hasn’t answered yet and I’m still curious as to whether or not a Jew wearing a black hat outside on the street is a chillul hashem?

I would venture to say that anyone who is walking about with a cowboy looking hat, while wearing a suit and tie, is going to draw attention to themselves. I remember hearing the argument that one should tuck in their tzitzis because it made people look at you because you appeared weird. Why not the same reaction by tzitzis tuckers to black hat wearers. Or sloppy beard wearers for that matter.

I was recently reading a biography of Rav Meir Chodesh, the mashgiach of Slobodka in Chevron. In it, he talks a lot about the Alter of Slobodka and how he demanded that yeshiva guys looked respectable. They had to be clean shaven, wear short suit coats, and ties. Apparently the learned crowd of Jerusalem at the time, were hesitant to trust them because they looked too proper and too snazzy to possibly be yeshiva guys. I wonder what happened to such refinement, how come, dressing like the respectable society around us became chukas hagoyim and we now favor this strange antiquated outfit that doesn’t wreak of refinement.

← In the alter heim
The Bris Anthem →

10 comments for “Are black hats a chillul hashem?”