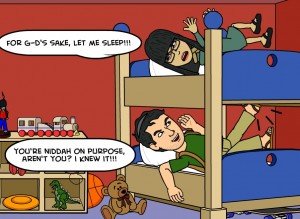 There is no way that I would voluntarily given my wife the better piece of chicken when we were newlyweds. I would have kept it for myself, under the guise of “what she doesn’t know won’t hurt her”. It’s not like I was lying to her, it’s not like I was withholding something she would even notice, I was merely being myself. Myself was pretty much a brash, careless, selfish bastard. My wife wondered about why I hated her, why I didn’t listen to her, and while she didn’t regret it, I know she constantly thought “Gosh this man needs a lot of work”.

I’m a year and a half into this mess we call marriage and I almost feel like calling myself a survivor. I’m not sure how others survive unscathed, there were some thrown books, fists brought down onto tables, and erev shabbos yelling that would have alarmed any neighbor, but I can honestly say that marriage has led me to more selflessness that I could even think possible for a stubborn asshole like myself. At some point, around a year into the whole thing, something clicked and it just became natural to give. Taking was in the past, there becomes this want to give that is inexplicable because I have never had such a want.

Wanting to give sounds so pussy, so whipped, so slave driven, yet it’s the only thing I want to do. My wife manages the money too, so I gladly fork over my meager earnings to the rent fund, but it’s more than money, it’s bigger than that better piece of chicken. For instance, there is no way in hell that I would have even had the thought to bring my wife lunch at work if she forgot her own. I wouldn’t have even offered because of the 30 minutes out of the way congested Silicon Valley traffic it requires of me. I would have thought of all the possible negative things that come along with it. Nowadays, I gladly trade in certain luxuries just to provide for my wife. I’m telling you that it’s mind boggling.

It’s like one big sick mussar experiment, you actually start to think before you talk. Do you realize that I’ve been yelled at by dozens and dozens of people throughout my life to “think before I speak” to no avail, yet a year of marriage changes that aspect of you completely. It’s not only about the give and take of “she’ll get mad at me for saying this” but it comes down to “what is really the point of saying this”.

It’s almost as if being married for just a year and half, has purged me of much of my former single existence. It doesn’t hurt to be in love, have great conversation, and someone you can have fun with and not just focus on paying the bills. I think one of the greatest assets for us is a complete openness and honesty, I cannot stress this enough and unfortunately too many people go into dating thinking they can hide things they’ve done or are into. If you have something to hide from your wife, you might as well call it quits before you realize that marriage is hard work and not really worth it if you don’t just dive in with all your shit, baggage, and stuff that you’ve hidden from others.

31 comments for “Marriage will break you”