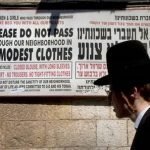 I want you to post this, not only because it can be inspiring, but because I think it should send a thank you to Aish who was the cause of a lot of  happiness and discovery over the last month or so. Like so many other secular Jews on their way to frumkeit, I was led to the internet. I may be from a town with a fairly large Jewish population, but it’s not easy to go from being secular your whole life to stepping foot into a shul where people are only talking to you because you’re holding your siddur upside down and wearing short sleeves. Like most BT’s I took the slow route, taking on little things here and there, but I’ve always been troubled by tznius. I was taught through the summer seminary program I attended and through different Rabbis that tznius was all about looking at what’s inside and not what’s outside.

I guess being from an inquisitive family always forced me to question certain drastic changes with society and tznius, in the same vain that keeping kosher did, would put me outside the spectrum of most normal people. I began to question the validity of such strict standards of tznius and the idea that these Rabbis and communities I was beginning to visit more often were judging me more for my tznius standards than anything else. Could it be that tznius was just a way for them to keep me in check? Why was it that kiruv seemed to always place this emphasis on strict tznius standards in a way that said “don’t let people judge you by the way you look” yet they were doing the same exact thing, on a worse level. In my world growing up, we didn’t really dress so immodest. I never wore halter tops, short shorts, or mini skirts. Yet, here in the frum world I was being judged harsher than ever before, for the way I dressed.

I’ve recalled reading similar ideas on forums and blogs, but it starting to gnaw at me. Could I really be a part of something that was so hypocritical? Unlike you and many other bloggers, I try not to judge people for being human. Just because a spiritual leader screws up and does something evil like child abuse or immigration scams, doesn’t mean the religion is lost. It’s just hard to justify becoming a frum woman, listening to the constant talk of tznius (it’s pretty much the impetus for many women to become frum) and then having the same things that they justified tznius with, thrown right back at me. They constantly speak of this bas yisroel that has so much to offer besides looks, yet on the few shidduchim I’ve went on, there’s this constant judging about my looks. Was my hair tied up or let down? What color were my stockings? How long was my skirt? How will I cover my hair? Extraneous things which mean no difference in people’s lives have taken the place of long legs, big breasts, and tight tummy.

I digress, the reason for this letter is not to rant about my issues with tznius. The point of the letter was to tell you that Aish posted a video about a month ago that showed a bunch of fairly good looking young adult guys singing about how girls didn’t need short skirts or to show off their bodies and that virtue was what made them beautiful. The video was a breath of fresh air because it focused on the positive in a way that my years of Tznius debate has never done. How could it be that a video by a bunch of Mormons could make me so interested in Tznius in a way that no Rabbi or Rebetzin ever could? As a person with strong Jewish identity it bothered me that I was so attracted to something put out by Mormons.

Like any internet based BT (became frum through the internet) could attest, I started researching the Church of Latter Day Saints voraciously. I started reading literature and shocking myself by wondering if Orthodox Judaism was pushing me towards Mormonism. Was it possible that God had a different plan for me, that my struggle with tznius had led me to this turning point? I laid the idea to rest, because it would kill my parents, my friends, my family. Not because of its non-Jewishness, but more because of its Stigma.

I sent out feelers, “what do you think of Mormons?” I learned a lot in the last few weeks. I also decided to cancel my upcoming year at Midreshet Rachel and get going on my MPA/MBA, instead of my chosen school I have switched to BYU (Brigham Young University) which will allow me to explore Mormonism with a more hands on approach. I’ve noticed that most people learned all they know about Mormons from John Krakauer or Big Love. Like the Jews, I’m sure immersion is required to fully understand and see if it fits me better than Orthodoxy has.

I’m not saying that I’m abandoning Judaism, but I should thank Aish for being open minded enough to post non-Jewish videos from other religions. I know that most other outreach sites like to stick to videos which only further their own agenda and are made by similarly minded groups of the same religion. Although I disagree with their stance on tznius, I think that allowing me and others the opportunity to see that other religious groups also have tznius standards has opened the door to religious exploration that so many kiruv organizations close firmly shut. Without Aish, I would probably still be attending Midreshet Rachel where I would further be exposed to their faulty and hypocritical ideas on women’s modesty that have been making me have doubts about the whole thing. I can’t say that Aish made me a Mormon, but I thank them for allowing me and others to see that Orthodox Judaism isn’t the only religious path one can take.


If you wish to respond privately, forward me your correspondence and I will forward them to the author. For obvious reasons she wishes to remain anonymous. Otherwise, comments are not moderated. It’s interesting to note that this is not the first time that I’ve heard of kiruv organizations publishing something that had the opposite of the desired effect.