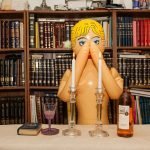 I always figured that the Off The Derech community was immune to scandal, after all many of the members had left Orthodoxy due to the hypocrisy perpetuated on a daily basis by its leaders. Yet, they are prone to the kind of hypocrisy that we who remain frum have to deal with. Rachmuna Litzlon, star of last weeks super popular interview, has agree to keep shabbos for money. I find this to be tremendously grievous, it’s akin to a PETA executive taking money from someone who asks them to go on a hunting trip. I’m sorry, but taking dirty money is never right, even if it’s for a good cause.

I wonder if anyone else is bothered by Rachmuna’s lack of ethics, who can blame him, he grew up chassidish the only ethics he really knows is how not to get caught up in a section 8 scam. Maybe this scandal is good for the community, it will show them that they aren’t really as badass as we think they are. How anti-frum could someone be if they are willing to be frum for a little bit of money. I wouldn’t break shabbos for $1000, I stand by my religious morals, but it’s obvious that those who leave the derech have taken such a dive in their morals that they are sitting idly by while their respect goes into the toilet.

How is the lonely single mother, battling for her children supposed to feel? How is the ex-chossid who threw away his former life only to end up in a dead end job with no family contact, supposed to feel? Did Rachmuna take these people’s feelings into account before he “stole” money and claimed it was for a good cause.

I personally think that his misdeeds will lead to a dwindling of his powers, already the kiss-ass on his page is much less than normal. His chassidim are defecting, his status as community leader is not 100%. Real Off The Derech people would never sell their souls for a fiddle of gold and that’s exactly what Rachmuna has done.

← What do sexy frum girls and mixed martial arts have in common?
People claim that one kotel stone looks like the Rebbe →