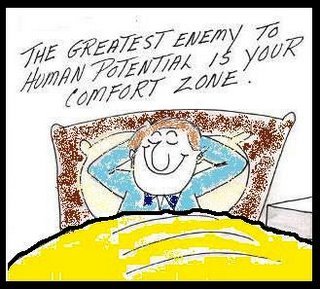 There’s a certain comfort I get from being uncomfortable when I walk into shul on shabbos morning in the middle of laining, the rabbi is sitting up front, the entire shul can see me go to the other end to grab a talis, and somehow, there’s always something in the drash about how important it is to be timely to shul. My number one excuse is that I just can’t stand sitting in shul for 3 hours on shabbos morning, number two excuse is that it’s really the only day I can wake up late, number 3 is that I probably got hammered the previous night and sometimes I like to take part in herbal experiments on erev shabbos as well. The fact of the matter is, it is a bit uncomfortable because the door to the shul requires you to walk into the front and everyone sees you. Luckily, most of the mussar about my lateness is in jest, but I still find some sort of comfort at being on the bottom of the totem pole when it comes to my fervent frumkeit.

Most folks I know would hate that situation, they want to feel comfortable. If you ask people why they go to a certain shul or belong to a certain community, it’s almost always because of the comfort level that they feel there. The opposite stands with me, with comfort comes laziness, lack of inspiration, and a general lack of growth. Growth is relative, but for me, growth in Torah, mitzvos, kindness, understanding, and in dealing with people who are in my community who I don’t exactly agree with.

There are no less than 10 people in my community who I imagine punching in the face every shabbos, and I’m sure that everyone hates someone in their community. The kiddush bouncer ladies, the alter cocker who smells like snuff and dirty ass, the newly minted BT who refuses to let up on mussar, the Rabbi, the sleazy Israeli crew, the nebach who no one wants to have for a meal, everyone has their own people they hate and wish they could beat up or at least give the finger to. In my search for growth, I consider having people I disagree with, a good thing. I would absolutely hate living in a place where everyone agreed or had the same hashkafa. What fun would that be? How would one arrive at some sort of understanding and kindness towards others if they thought, looked, and acted exactly like them?

The last time I was in New York (June 2012) I had a shabbos meal dispute with my father and his father in-law about their political reading. I asked them why they never read, listened to, or talked with people who they didn’t agree with political. I was being perfectly peaceful, but as the accusations of my west coast liberal ways escalated they decided that I was insane for suggesting they read or watch television news shows that they disagreed with. “Why on earth would anyone need to watch anything but Fox News? Why should I listen to NPR?” and so on…It boggled my mind why any educated person wouldn’t want to see both sides of story and gain a better understanding of those who they disagreed with. They told me that they knew all the “arguments” and had heard them all before. Unfortunately, most folks are exactly like this, whether it be politics, religion, music, or food. They remain in their echo chamber, they remain within their homogeneous group and usually fail to step outside of their worldview.

Most folks I meet who know where I live like to comment about the Rabbi, he’s tough, very machmir, and full of this passion that makes him lovable, even if you don’t agree with anything he says. Sure, he gets up and rants about things that many others Rabbis in the Bay Area would be booed off the bimah for, but at least we know where he stands. There’s a certain pleasure one can take from being in a community where liberals, right wingers, frummies, and intermarrieds love the Rabbi. Heck, I love the rabbi and community for taking me out of my comfort zone. It’s not only about being that one guy who doesn’t stand up for birchas hatorah, show up on time, or come to every mishna brura and mussar shiur, it’s about learning to live with others and stepping out of your own little world.

Some like to say that living in the Bay Area polluted my mind, made me into some sort of commie-liberal-left-coaster, but in reality it merely exposed me to a certain level of an uncomfort zone. I find it strange that when trying to listen, trying to hear others, trying to gain understand, I’m accused as being a liberal. I’m not sure how trying to find out and discover views other than your own became a liberal thing to do, but if that’s what being a liberal means, I’ll happily take that designation.

I’ll be the first to admit that growing up in New York was not the best for this, my friends were all frum, my family was all frum and everyone walked to shul. I’m not sure I ever really had non-frum friend until I was in my middle 20’s. I don’t think I knew any democrats or folks who didn’t carry the same views as everyone I knew until I was in college. Large communities create a shtetl situation where it’s easy to think that your views are all there is, it’s easy to think that it’s stupid to think anything else or to be friendly with people who aren’t exactly like you.

It’s very uncomfortable to hear views that differ from your own, views that you’ve been taught to disagree with, yet eventually if you step out of your comfort zone long enough you actually begin to listen. Listening in the first step in understanding.

8 comments for “Get out of your comfort zone”