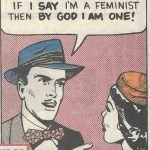 There was an article on Haaretz about a supposedly Haredi (Charedi) feminist who is trying to make it so women can be elected to office in Charedi parties. Immediately, I realized that this was just a sensationalist news story from some woman who may herself Charedi but is hardly so. Charedi women don’t let their pictures get posted for millions to see, they usually don’t go to law school, and they sure as hell don’t call themselves feminists. I’ve noticed that lately, whenever someone wants to get 15 minutes of fame, they refer to themselves as something that they are likely not to be.

It’s possible that within her circles she is considered a feminist for leaving the house, driving a car, and going to law school, but that may mean she isn’t really Charedi. I’m not certian what she is, but it’s unlikely that she’s a Charedi since they would have already placed a cherem on her for showing her picture to loads of taiva filled men who can’t control themselves. Then again Feminism is not one thing, it’s relative to one’s own community. So in a community where women get bleached for wearing red and beat up for sitting on the front of the bus, feminism may just be someone trying to create some sort of balance.