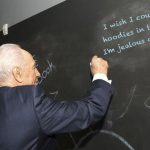 The secular teachers in yeshiva get the short end of the stick, many schools, including mine weren’t too great in their care for the secular studies department. Sure, we were supposed to graduate with a regular regents diploma, with a few years of modern Hebrew under our belts, but it wasn’t the focus and everyone knew it. No one talked about the SAT’s, college applications, or their profound interest in literature and world history. We were high school yeshiva guys, we weren’t interested in much besides porn, girls, and sneaking out to watch movies, but it seems that the general lacking attitude towards secular subjects, meant that we also mistreated our English Teachers. I’m only reminded of such things, because The Forward has a great piece by one such teacher.

They didn’t discourage college in my yeshiva, but they definitely encouraged beis medrish, going to yeshiva in Israel, or moving to Queens to live the Chofetz Chaim dream of learning 3 blatt a month. The only thing I remember being discouraged, was YU, that was treif and a big no no unless you happened to be a local kid from a modernishe family, then they had no control over your moral servitude.

I only have fond memories of my secular studies teacher. There was this one fellow who looked like he was 45 years old and it turned out he was much older. In my youth, I considered him a genius. Fact is, we all considered him a genius, not only because he was way older than he looked, but because he taught Global Studies and economics, the two subjects that many of us felt we would need in our future adulthood. Math and science were always dismissed by me and I remember there was this poor fellow named Mr. Dumbelton or Dumbarton and these kids drove him nuts. I really felt bad for the guy, he was a short and stocky, balding fellow, a real nerd, and everyone dismisses math as useless. I’m not sure why I ever dismissed math, it’s one of the few useful things taught in yeshiva, besides for grammar and economics.

We had this science teacher at one time by the name of Costanza, looking back I’m sure he was one of those guys who had a big monster truck and blasted Van Halen on the weekends on the way his favorite fishing spot. All I can remember is that he was fond of Syracuse University basketball and arguing with us about evolution. I remember him going completely nuts over the fact that we wouldn’t even acknowledge the possibility of evolution. Even at 14 or 15 years old, we had already undergone the classic anti-evolution training. A healthy dosing of right wing talk radio from our parents didn’t help either.

Ironically, the only teacher in my entire schooling career that I’m in touch with is my high school English teacher. First off, he was a cool dude, always wearing weird shit, into cool stuff, we knew he was cool and that kind of demanded some respect. I’m sure he has a lot say on the subject of disrespect. He used to come into class with a big bag of books and drop it on the table, you could pick whatever you wanted, the only book I remember from my entire high school English career is The Plague by Camus. I’d like to believe that there were raging battles between us know it all racist and right wing yeshiva guys and the liberal Mr. Shein, but I’m not really sure what happened. I did get caught cheating on a test once and was sent home, which rocked my world because it was my first long distance train trip.

Even though we mistreated out secular teachers, we were also fascinated by them, besides for the janitorial staff, they were our only link to the outside world. They knew what was going on in the real world while we stuck listening to mussar and spending our nights learning gemara (at the time I felt it to be even more useless than math). May we all be zoche to recall our mistreatment of our English teachers and do teshuva for it.

← Are 4 section velvet yarmulkes too modernishe?
Chukas Hagoyim is nothing to be proud of →

39 comments for “How badly did you treat your secular teachers in yeshiva?”