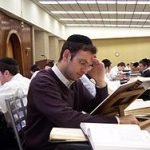 For the second shabbos in a row my seat in shul was taken, in fact it’s been taken all week and I kind of want to walk up to the guy who’s decided to commandeer it and ask him when he’s leaving. I know he’s leaving soon, I’ve seen him round these parts before and it’s only time until I’ll reposition myself in my makom, but until them I’ve been relegated to the middle of the row. The only problem is that it’s not really my makom kavua, I rarely show up to shul on time, very rarely come to shachris during the week, and don’t have any simanim to signify that it’s my seat besides for the collection of Artscroll biographies and mussar seforim.

Still, not a week goes by that my makom kavua is threatened, I sit in the back row towards the center of the shul.It provides a good view of the Rabbi and bimah, easy access to leave to the front or back door of the shul and it has a good amount of legroom. On top of this, most of the row is empty, so guests mistaken my seat for being empty. Unfortunately, my shul is full of very nice people and I don’t think that anyone has even made a scene over losing their makom kavua. I did see one time that one of our former crotchety old man members got his tzitzis into a bunch when he thought someone stole his talis. I’m not the only one to lose his seat, my wife loses hers and gets really pissed off about it. She constantly lets me know about the annoying women who feel the need to enter and exit the shul 30 times per davening, the women that talk, and the women that crowd her seat to convince her to move. Luckily the men are a bit nicer.

Naturally I think of all the assholey things I could do to make people realize they took my seat. I could merely walk in 2 hours after shachris started and sit next to them and crowd them. We have enough empty seats in shul that most peopledon’t have to share armrests ever. I can also walk in and mumble nasty things about makom kavua ganuvim under my breath as I noisily gather my seforim and eye potential replacement seats. Sure, I contemplate having loud discussions during kiddush about the guy who stole my seat, within his earshot of course. I could throw a fit, I do kind of have these day dreams during shul about what would happened if I pretended to go insane and started cursing out the rabbi and running around naked.

I never do anything of the sort, but a guy can still dream right?

The fact is that I don’t even pay membership, I never show up on time, so can I really claim that I have a makom kavua? Or is it merely my preferable seat. Being a man of the mussar, I actually try to do the opposite, I try to pretend like my seat is in the middle row and I don’t make a show out of grabbing whatever book I’m in the middle of. Unlike most normal people, I do most of my Jewish reading in shul and I’m not sure how to get through more than 20 minutes without a decent book, but that’s for another time.

On the other hand, in New York I used to be kicked out of seats all the time, so much so that if I go to a new shul I always ask if “this seat is taken” and I utilize the types of responses to that question to gauge whether or not the shul is friendly. Most recently I was in Valley Village at Bais Tefillah and I walked in at my regular post laining time and I asked some guy if there were any seats left, he immediately got up, told me to seat down and grabbed me a talis. Now that’s some damned good makom kavua sacrifice.

← The Halachos of Halloween
Are 4 section velvet yarmulkes too modernishe? →