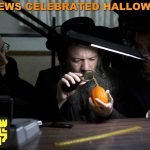 I’m pretty sure that the only goyishe holiday celebrated en masse by Jews is Halloween, on Christmas we go to Chinese Food thereby not celebrating it, on Thanksgiving we push it off to shabbos, and sometime after Easter we buy chocolate eggs at deep discounts from the local drug store. However, Halloween is one of the only yomim tovim that Jews can pretty much celebrate without fear of avodah zarah, because in this country it was never a pagan holiday. Some folks also think it’s good for chinuch because it prepares us for adar which is just around the corner.

As with any holiday, the halachos are a hotly debated topic. Sephardim do not hold of Halloween, but many mixed breeds do, as well as most ashkenzaim, except for those of Ungarish decent. Although Rav Moshe clearly forbade Halloween, his teshuva clearly states that for chinuch of simchadicke purposes it’s ok, as long as you check the hechsherim on all treats and make sure to go trick or treating at least 48 minutes after shkia.

There is a funny picture going around of several Chassidim examining a pumpkin, the funny thing is that pumpkins must be checked for bugs. Aphids, worms, and ants burrow their way into the flesh and it’s one of the few non-leafy greens that require a thorough bedika. Even if you just plan on carving your pumpkin and burning it with the chometz, one must not get any hanaah from insects and should be careful to buy pumpkins on the smaller side for this reason.

Obviously the correct way to celebrate Halloween is up for debate, thank God the yuntiff wasn’t considered interesting enough to be discussed in the gemarah, but still check below to see if you hold of what I have seen in various places. Thanks to all those who helped with the sources.

Make sure your candy has more than one hechsher on it.

Make sure your costume is within the guidelines of the va’ad hatznius.

It is not necessary to make a borei pri ha-adama before carving your jack-o-lantern because you are not eating it. But according to the opinion of the fulla bulla rav, you might have to if it is done after shikiah. (In the shtetl, jack-o lanterns were used in a similar way to the blood on the door during pesach, when the mobs would come to slaughter the Jews, they “passed over” the houses that celebrated Halloween) Hence, it is a hiddur mitzvah to be persumay nisa and publicize what happened.

A bisulah can only leave the house if her skirt is 2 amos above her knee.

If Halloween falls on shabbos, bowls of chullent may be distributed, but must be wrapped.

If a pumpkin’s stem is missing, it’s pasul. You must finish your trick or treating by chatzot.

It is obligatory to light a jack-o-lantern, and one should even borrow money to fulfill this mitzvah. If a poor person needs money for a pumpkin and candles the community is obligated to provide for him.

If a number of people are lighting jack-o-lanterns in one household they should make a slight separation between their jack-o-lanterns so that there is no confusion to the observer as to the number of candles.

Only packaged candy should be given out, so as not to cause someone to be baal tashchis.

All carved up pumpkins should be saved until it’s time to burn the chometz, many hold that you place them above the ark where they keep the lulavim.

There has been a big debate as to who is chiyuv in trick or treating, are adults chayiv, or are they just there to teach their children the proper way to perform the mitzvah. Many hold that although it is a mitzvah sh’zman grama, women are allowed to trick or treat even though they aren’t chayiv after age 12. (Whether or not it’s tznius for girls/women to leave the home is something you should ask your own Rav)

Egging homes that are clearly mechalel Halloween m’pharhesya is not only accepted, but encouraged. They say that those who are medakdek when egging those people in violation of clear mitzvos should be complimented and get an aliyah that shabbos.

Carved Pumpkins are considered muktza and should not be moved on shabbos, if it is on a table you need, it is ok to use a shinuy.

Seudas Halloween should take place after chatzos on the first day, kiddush should be said and parve chocolate should be eaten after motzi.

30 comments for “The Halachos of Halloween”