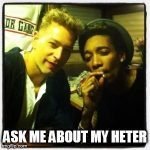 Been loving your responses to some of the “fan mail” you get and I was wondering if you might have any insight into whether or not Matisyahu’s music is kosher. You’ve mentioned before that many frum people consider goyishe music to be treife because since they put their soul into it, goyishe music may be considered avodah zarah. Then again, my yeshiva Rebbe’s considered Metalish and Piamenta to be goyishe and if that’s the case, surely they would consider Matisyahu to be so. Maybe you can shed some light on the situation, now that we know for sure that he isn’t a chassidic reggae star anymore and just a regular goyishe Jew who dabbled in religion for a little while.

To be honest, I haven’t give Matisyahu much thought since “beard gate” and the picture of him without a yarmulke that pissed everyone off. I have a feeling that some folks were happy because it allowed them to do the whole “I told you so” to everyone who thought that someone with such exposure could remain frum. If I were a Rebbe I would allow my talmidim to listen to the older Matisyahu that was recorded when he was frum, that way we don’t have to deal with the avodah zarah that he is surely taking part in now. Besides, his older music was better, but we should be strict as not to listen to older songs that were recorded at shows that he wasn’t wearing a yarmulke at.

There are stringent opinions that hold all Matisyahu music should be publicly burned to acknowledge that we do not tolerate sinners in our midst. Even chabadnicks felt burned by him and have apparently added him to the shit list along with David Berger, the folks from Uri Letzedek, and Shmuely Boteach.

To put it frank, Matisyahu is now considered a goyishe-Jewish musician like Bob Dylan, Kiss, or Billy Joel, and is considered treife by most of the frum world.

22 comments for “Is Matisyahu’s music kosher?”