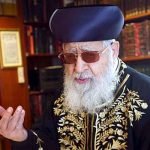 Rav Ovadia Yosef has died at 93 in Israel today

I don’t normally do posts on folks who pass away unless they were as cool looking as Rav Ovadia Yosef. He was the Sephardic gadol hador and we mostly know him as that Arabic imam look alike who wore sunglasses, cool smoking jackets (spehardic bekishes) and apparently said outlandish things at seuda shlishit that were always taken out of context by pretty much everyone including myself. What we tend not to know was that he was one of the true gedolim of our times , favoring leniency over stringency and trying to be moderate where so many others have been extreme. I fear that we have lost one of the last lenient poskim.

Instead of lying to you all and claiming that he touched my head and gave me a bracha and some sephardic sherayim consisting of kibbe and malawach, I’m just going to say that I’m saddened by his death and that he was one of the few gadolim of our time that believed in the power of leniency. He held by the gemara that said the “power of leniency is greater” hence ruling that the lenient route is better than the stringent, this seems to be lost on our modern day poskim who seem to be consistently ruling that chumrah’s are better.

Yosef regarded ruling with chumra as especially harmful in the current generation (“the generation of freedom and liberty”), since strict ruling might lead individuals not to comply with the Halakha. Writing in Yabia Omer, he says: “And truly the growth of chumrot leads to leniency in the body of the Torah.” From Wikipedia

In reading his views on Zionism I found them to be much more open minded than many of our present day “gedolim”, he held that Hallel on Yom Ha’atzmaut should not be said with a bracha, but that if a congregation wished to say it, they should say it without a bracha. To me that’s a middle ground being Zionists and Charedim that is getting rarer and rarer these days. I wish some ashkenazic gedolim could rise to such an occasion of moderate views such as Rav Ovadia.

While Rav Ovadia has said many controversial things that wemay or may not agree with, one thing we can be sure about, he was a great learned man who related to modern day society. We’ve lost a great gadol who was moderate as compared to many of our ashkenazim poskim and it’s a great loss.

Apparently there are over 500,000 people are his funeral.

Below are some good reads:

The NY Times coverage was good as well.

Vos Iz Neias has a video of the funeral on its front page.

Always good to get the Israeli perspective Jpost is good as well.

Failed Messiah has a very nice piece and if he has nothing bad to say, you know Rav Ovadia was a good man.

Search for more about Ovadia Yosef on 4torah.com

← I love when people take me seriously
Is Matisyahu’s music kosher? →