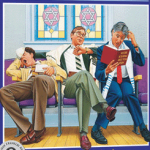 It’s not all that often that I can sneak into a shul without being noticed and once I am noticed or recognized it makes it that much harder to conduct a proper shul review. Luckily for me, I showed up to Shaarey Zedek in Valley Village during birchas kohanim on shimini azteres. I was able to sneak in, throw on a talis, browse the siddur collection, make sure the mechitza was kosher, and listen to some painful prepubescent boys lengthen the davening by 30 minutes in the name of chinuch (or upholding the modern orthodox mantra to make services painfully long)

For all of you who don’t know, Valley Village is like the Five Towns of LA, although there are yeshivish, chassidish, and other types of Jews, it seemed to skew towards middle to upper middle class center to right of center Modern Orthodox. At Shaarey I immediately went to work on trying to label every person in the room, which is all the more complicated when you’re trying to do the whole yuntiff davening in 15 minutes. Good thing they had kiddush afterwards, which allowed to me to check out all of the girls my age in their hoochie shoes and short skirts. Don’t worry, I pounded herring and made sure that none of the sexy looking skinny dudes in cool sunglasses tried to pick up my wife.

The chairs at Shaarey are very comfortable, they are blue, which is going against the minhag of making all shul benches and chairs red. Not sure if anyone before me put much thought into it. I also noticed that they have really good leg room, but the annoying shared armrest thing. They also have great back of bench shtenders for everyone. I’m not sure if I could convey to you how important back of bench shtenders are to me, but if I would have seen the rabbi at kiddush, I would have felt the urge to go up to him and tell him that this single feature was what I liked most about the shul. The shtenders didn’t have any complex pole which had to be placed in a slot, it was merely a simple spring loaded bar that swing out, such engineering was a great kiddush hashem to those from more religious institutions that laugh at modern orthodoxy and say they don’t come to shul to daven. Any shul with such a good seating and davening situation is obviously putting the davener first. I just wonder if the ladies also had shtenders.

In that time period before the end of shul, when people are socializing, I made a beeline for the library/beis medrish, it wasn’t very inspiring. Nothing out of the ordinary, just the generic seforim and books that occupy 99% of the shuls in America. I then went to check out the bathrooms, I noticed that they had two types of toilet paper available, the generic bathroom tissues for those who get nostalgic over such nightmares and regular old toilet paper. I wanted to be dan l’kav z’chus and assume that the posek of the shul allowed such a thing that deviates quite far from the mesorah, or maybe they assumed that everyone in the shul knows that regular toilet paper on shabbos and yuntiff is clearly assur as stated in the Tur.

Apparently there are three minyanim at Shaarey, including a frummer and faster one than the main sanctuary. In general, it seemed like the classic right of center Modern Orthodox shul that has a frummer rabbi than the congregants. Sure, I noticed some black hats and beards, but it was the older baal habatish crowd that wore the yeshivish gear, while the bulk of the shul was younger, hip, and more modern looking. I should note, that women seemed about 50-50 on hair coverings and many of the ladies in short skirts and platform heels still chose to cover their hair with a fall or sheitle. (Basically the shul was too diverse for me to take a proper sample set and I showed up too late)

I wish I could tell you all about the amazing kiddush, but unfortunately it was one of those kiddushes that seemed not to be sponsored. There was herring, dry cake, and soda. There was some mild pushing and double dipping as well.

I’m rethinking how to rate a shuls friendliness when it’s a large community. I slipped into Shaarey and no one said a word to me (save for my hosts and one person I knew) but that doesn’t mean it’s not friendly. If you would have dropped me from the sky, I wouldn’t have been able to tell that I was in an out of town shul, it felt like a big NY shul. It’s not like I expected the rabbi to approach me and ask if I had a place to eat.

Think of this as a partial review.