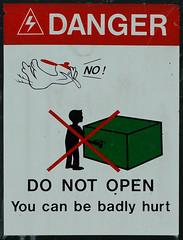 In response to today’s condemnation by the Agudah, a representative of Yeshivas Chatichei Torah challenged Agudath Israel for being too inclusive in their philosophy. You can say the pot and the kettle are now both wearing black hats.

We are deeply troubled by the history and direction of the Agudah movement. As you know, the name Agudah comes from the Hebrew word agud — a union or collection of diverse interests into one coalition. We reject the idea that Torah True Judaism™ should be represented by a body of people who include both Chassidim and Misnagdim, Ashkenazim and Sephardim. History shows that Jewish movements often take names that mean their very opposite. We must wonder why people still call them misnagdim when they do not oppose the chassidim anymore. Their name has been belied by their actions. We fear that Agudah may one day seek to include RCA in their union, which would only make matters worse for the Torah True Jew™.

Everyone knows the midrash Sifrei on the pasuk in Devarim 14 that interprets “Lo Titgodedu” to “Lo Ta’asu Agudot Agudot” — do not join the Agudah movement!  There could be no more explicit a message in the words of Chazal that speak out against this movement, one they obviously saw with Ruach HaKodesh would arise in the 20th century.

The Agudah blurs the lines of the Torah True Message™ insisting on a closed and exclusive movement, by uniting with others whom they clearly disagree with on matters of theology. Their hypocrisy in this matter cannot be ignored. Ask any Agudah member who the Torah True Leader™ of Judaism is? ask which Rabbi or Rebbe should lead benching at their annual dinners? ask if the Novominskers are greater than the Litvishe rabbonim?

Countless Jews have followed movements like the Agudah and have been misled down the path of inclusion and tolerance. We are dismayed they continue to use their prominent public platform by issuing statements via their forbidden internet channels that reflect agreement on the part of their diverse followers.

We urge the Agudah to reject more voices in their midst and elevate themselves to become a singular, still, and silent voice, like the one that called out to Eliyahu on Mount Carmel. When that day comes, we at YCT will rejoice as we listen to their silence.

The journalists at FrumSatire.net were unable to confirm if Rabbi Mitkadem is a legitimate representative of YCT, but we figured they are so inclusive, they would not mind being represented by any fictional character who called himself (or herself) a Rabbi.

Obviously Yeshivas Chatichei Torah (“Torah Hunks” not to be confused with Chovevei Torah), would feel threatened by the Agudah movement if it becomes more open and inclusive to diverse voices within Judaism. In order to maintain their brand, YCT needs to ensure that everyone else remain close minded so that they can stand out as being unique. Fortunately, the current direction in the frum community looks promising in this regard.

For more exclusive viewpoints, search using 4Torah.com and make sure to reject all the search results.

← What to do with a used Lulav?
Two yeshiva guys making out →

4 comments for “YCT concerned, Agudath Israel is too inclusive.”