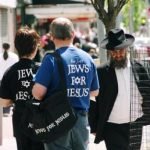 Logic is the third rail of religion. – HaRav Rachmuna Litzlon

If I had a dime for every time someone told me that other religions besides Judaism were insane, I’d be able to afford organic tomatoes. It probably started in grade school and hasn’t ended yet, but every time a religious Jew talks about another religion, they have to throw in the fact that anyone who believes in Jesus or Buddha or does this and this practice, is totally insane. Well, this morning as I tried to stay awake during Hallel I felt fairly insane and I felt bad for anyone who would try to make sense of a bunch of bright relatively normal Silicon Valley programers for shaking overpriced palm branches in 6 different directions as they asked the Lord to save them now.

Then it hit me, like a ton of year old esrogim that have had their peel removed to make esrog liquor out of cheap vodka, the more I tried to make sense of Judaism, the more likely I was to go off the derech. I guess this is one of the reasons I don’t really understand folks who get “into” Judaism for intellectual reasons, anyone with half an intellect can see right away that most of the traditions make no sense, they are ancient rituals that are meant to please the God’s, in our case, one God. So of course I started wondering about those who feel the need to bash other religions in order to make sense of Judaism. “But we are the only one’s who had a mass revelation!” doesn’t really excuse the use of Chickens instead of Jesus or make sense of most of the things we do. However, I’ve decided that making sense of it is not my goal in life, rationalist Judaism is not for me, because when it comes down to it, I need some good old fashioned heart and soul.

As long as you aren’t hurting anyone else with your religion, you should be free to practice it, of course this leads to the moral dilemmas that open minded, modernishe, skeptical, orthoprax, left leaning, questioning, biblical critics, and logical minded folks have to deal with on a daily basis.  The classic “how can I be a part of a religion that considers me an abomination” comes into play for some folks and since as an avid cyclist I swallow bugs daily, I also have to struggle with being an abominator. It’s a rough world out there, but I figured I’d share my epiphanies with you fine folks.

62 comments for “People who believe in Jesus are crazy”