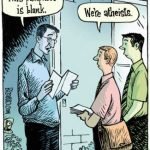 I have this love and hate relationship with Atheists, it just so happens to be that Atheists are almost always interesting and smart people, but sometimes their militant views can get on my nerve, probably the same way religious fanatics get on their nerves. So I’m sitting at this meal on the first night of Rosh Hashanah and none other than a vocal Atheist is at the meal, surrounded by a bunch of Baalei Teshuva trying to convince him to check out Akiva Tatz. I kept my mouth shut for most of the meal.

I guess Atheism is kind of like abortion, both sides make perfect sense to me and so I when confronted with an Atheist or Abortion debate I usually keep my mouth shut. No, I can’t prove to you my reasoning for my belief in God or Judaism, and no I don’t think it makes much sense, but it works for me and I’d appreciate it if you don’t try to do kiruv towards me. On the other hand, one of the reasons that Atheists are usually bent on doing kiruv towards religious folks and general believers is because religious folks usually can’t deal with Atheists. They just don’t get how someone could not believe and so they feel the need to push their beliefs in an effort to convince the Atheist that they’re wrong.

It can be quite painful to watch the two sides debating something that you can totally relate to, yet don’t want to involve yourself with for precisely that reason. It’s kind of like the gay thing, straight folks think that gay folks are trying to “shove it in their faces” when in reality we straight folks have shoved our straightness in their faces forever, with our billboards, nuclear families, and storybooks depicting loving straight couples. I guess what I’m trying to say is that if we want those darned Atheists to leave us alone, we have to leave them alone. I’m pretty sure that in other communities (besides for Orthodox Judaism) many folks of varying backgrounds and religious beliefs can be friends without getting all up in each others grills all the time.

Don’t worry, no one was converted to Atheism or frumkeit on the first night of Rosh Hashanah, but I’m pretty sure that the Atheist could have the upper hand if he got a hold of a wavering BT who was into science and logic. I’m also sure that eventually this formerly frum Atheist may be won over by the warmth of a lively friendly shabbos table, because how the hell else are you going to meet anybody outside of work or school around here. I’m basically wondering when the openly Atheist BT will come into existence.

← American Apparel chassidish model and Shomer shabbos heroine dealers!!!
Growing up in a bachelor pad doesn’t prepare you to be a good host →