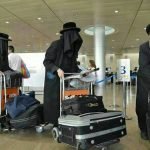 Last week there were some interesting photos of chassidim leaving Israel for Uman, in them several folks could be seen wearing blindfolds. Naturally, I thought it was a joke, maybe a satirical piece run by the frum websites, because no one seemed to show any alarm. Alas, they were real and the fact no one seemed to be in an uproar was also troubling. If I wasn’t working my butt off, I would have sounded my alarm, but than I started wondering if Chassidim walking around in blindfolds would stop them from starting a riot every time 6 year old’s didn’t conform to their standards.

Could it be that those Charedim that are so into tznius have finally given up their fight against women and started to fight their own raging desires? Is it possible that some folks have decided to work on themselves, rather than blame the women? I wonder if that’s the case, but it seems alarming that these folks are trying to run away from something, rather than deal with it in a menchlachkeit way.

My father told me that when he was in Lakewood back in the day, they had to walk from the dorm to the beis medrish and in the warm months there was this lady who used to sun bathe on the way. All the bochrim would cross the street, but apparently Reb Ahron would walk right past her and look at her when he bid her a good day. I was just reading the biography of Yehuda Zev Segal (the Manchester Rosh Yeshiva) and in it he has story about a certian Chassidishe Rebbe he really respected because one time this Rebbe and his talmud were sitting on a bench, a non-Jewish girl sat down next to them and the talmud jumped up. The Rebbe motioned for him to sit down and a few minutes later, he looked at his watch and said “my the hour is late, we need to get going” so as not to make the girl uncomfortable. I’ve heard and read dozens of stories like this.

Sure, these people are gedolim and holy dudes, but can’t we learn from them? I’m not sure when this tznius madness started, but whenever I think we’ve seen the craziest of it, it gets worse. I remember saying years ago that it seemed as if the end goal was to ban women from the public sphere (the Rambam said that women should leave the house twice a month) I’m not sure that blindfolds are such a great thing, it appears to be one of those things that could become a crazy chumrah with the eventuality of halachic rulings. Can you imagine a world in which people don’t hold of the hechsher of folks who don’t wear blindfolds? Well, it’s not so crazy to think about anymore.

13 comments for “I guess blindfolds are better than segregation”