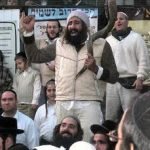 Just wondering if you’ve seen all of the anti-Uman stuff as of late, as if suddenly the entire frum community has woken up to something that’s been going on peacefully for many years already. Why all of the animosity? No one seems to have a problem with folks going to kever rochel, maaras hamachpeila, or meron, but suddenly when it comes to Uman they are all up in arms. Maybe you can shine some light on this for me?

On the way to Kiev…

You make some interesting points, to be honest, I would love to go to Uman, but I’m a bit homophobic after hearing about all the uh “happiness” that goes on there, I also don’t want to be tempted by the ridiculously low priced prostitutes that also make a pilgrimage to the area around Rosh Hashanah. I almost made it one year, I heard about someone who was donating flights, but in the end it didn’t work for some reason or another, so I’ve never actually gone to see it myself. I would definitely rank it up there in the top 10 Orthodox Jewish things you need to do before you die.

I think the animosity is misguided, probably perpetuated by the growing Off The Derech community that seeks to sabotage anything that they can put a negative twist on. I also noticed that some anti-frum Rabbi put out a video telling everyone why we shouldn’t go to Uman. I especially love how the very same people who mock random rabbis for giving them over halacha, will come to the rescue when they have negative things to say about Judaism. This Rabbi is probably going to have a hard time at the court of appeals on Yom Kippur for bringing down such a spiritual pilgrimage as Uman. I mean, how many other spiritual pilgrimages are there in Judaism today? There’s motzi shabbos pizza pilgrimage, the Friday afternoon Catskills pilgrimage, the Chayei Sarah – Chevron Pilgrimage, not much else in the way of pilgrimages and this SOB had to take one of the most sacred Jewish pilgrimages since the time of the beis hamikdash and trample all over it because his wife wouldn’t let him go.

I guess leaving the family for a trip around the world to a town with an insanely high number of frum gays and Russian prostitutes may worry some people, but I’m certian that the families of the men and boys who attend Uman are not worried. I’ve heard that women beg their husbands to leave them with their 10 screaming children in order to pray at the grave of Rav Nachman, because of his numerous ways to help you with the sin of masturbation. I guess it’s a little ironic that Rav Nachman would have such a focus on the wasting of seed when dozens of my frum gay friends have told me that the best frum gay party of the year is at Uman…

← How bad is your attention span?
Wave money not chickens! →

12 comments for “Why is everyone suddenly anti-Uman?”