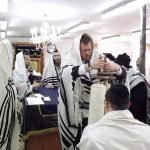 I got an email from the shul last night, informing me that I was to be honored with gelilah for the second Torah on the second day of Rosh Hashanah. Being the cynical conspiracy theorist that I am, I immediately called Harav Eliyahu Fink to ask whether this required me to sit through long periods of time. I honestly feared that those long periods of boredom would lead me to sexual thoughts and everyone knows that the more you think about repressing sexual thoughts while holding a Torah, the worse it gets. I would say that it ranks up there with being called to the Torah on shabbos afternoon and farting so bad that the Rabbi takes a leave of his throne. I also feared that this second sefer Torah gelilah honor, was really just a way to get me to sit through shofar without reading the gadol fiction I spend most of my time in shul reading.

Fink told me it was only the haftorah, great, but what if some stuttering newly indoctrinated BT was hired to do the haftorah and he got stuck on some complicated word like misragshim? What if the volley of suggestions from the audience as to how to pronounce the word didn’t work and he had to be changed out in the middle? Has that even happened? The only time I saw someone get changed out was on Pesach when the old Holocaust survivor doing musaf collapsed in the middle.

Ok, so it wasn’t a ploy to get me to sit through shofar, but was it some evil conspiracy to get me to shul on time. On shabbos I don’t come to shul on time, it’s not because I can’t come to shul on time, it’s because I prefer to get to shul in the middle of laining so I could catch up and say both of my shemona esrei’s with the musaf tzibur. If my shul had a normal 1.5-2 hour davening length, I would definitely come on time, but 3 hours is way too long. So each week when the rabbi reigns down his fiery storm of mussar he always mentions those people who come to shul late, the other guy who waltzes into shul 2 hours late knows all of shas, so I use that as my heter.

There’s this one very annoying flaming BT in shul who feels that he needs to give me mussar every week about this “coming late business”, I wouldn’t put it past him to pay for gelilah in order to get me to show up on time. Does Rosh Hashanah gelilah even cost money? Some shuls mark everything up for the high holidays, it’s not about God, it’s about the beginning of their fiscal year and the empty coffers. I wonder if this guy has decided to translate his annoying mussar into strategy.

Of course, there’s also the Rabbi who wishes I would wear more than hippy pants and sandals to shul, it’s not exactly the type of shul that wants one of their only yeshiva educated FFB’s to be the guy dressing like a kibbutznick. Traditionally I put on a suit twice a year. The first night of Rosh Hashanah and the first night of Yom Kippur. What about the days you ask? Well, I put on the suit, walk to shul and about an hour into davening I regret it. Sure, I take those snarky “man you clean up well” comments as compliments, but the lack of comfort and maneuverability of suits drives me nuts. Maybe with giving me some sort of honorm, they’re hoping I wear at least shoes to shul.

Should I feel honored?

← The Fight for the Life of Young Idan Zablocki; Interview With NYC Republican Mayoral Candidate Joe Lhota
How bad is your attention span? →

12 comments for “Am I really being honored”