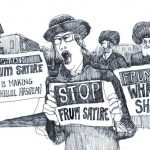 I happen to run across your blog in doing a search for Pomegranate Supermarket. I read a few of your posts and I have to wonder, why all the negativity about yeshivish people?

As a frum person, I always try to look positively at other frum people of all stripes. It always surprises me when I don’t see others doing the same.

I tend to get the same exact letter from people of all stripes (not just frum people) who stumble across my blog and feel offended, so you aren’t alone, plenty of others have been offended as well. If you would have read through the blog instead of getting offended right away, you would have found that it’s not negativity, it’s satire and humor, which means that 99% of what appears on this blog is not serious at all. Heck, I myself don’t even agree with half the things I write. You would also have found that yeshivish people are a very small percentage of the folks I make fun of. In fact I would say that Modern Orthodox, Chassidim, and BT’s take a majority of the beatings.

The simple fact of the matter is that you see through yeshivish eyes and so you’re selective in what offends you, the gays, chabad, and hipsters are exactly the same. I can go a year without writing about chabad and suddenly, my whole blog is one big chabad bash fest according to whomever stumbled upon that post and never read anything else.

However, the only reason I’m writing you back is because your letter isn’t open minded at all, when I saw the line “As a frum person, I always try to look positively at other frum people of all stripes. It always surprises me when I don’t see others doing the same.’ I almost spit my organic, locally grown, yogurt parfait out – I didn’t because everything was so expensive to make it. But seriously, do you actually think that way? I understand completely, you basically don’t look positive at anyone besides frum people. Do you look at frum people of all stripes exactly the same? Do you look positively at frum people who may support liberal ideas that don’t mesh with your idealized frumkeit? What about regular people, do you walk down the street and have negative thoughts about everyone besides those who fit your little Flatbush box?

← The Tragedy of the Four SEED Boys
What chumrah or ban would you like to create? →

94 comments for “Letter to the editor: Why make fun of yeshivish people so much”