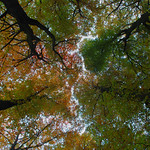 Four SEED boys came to Orchard Beach this summer. And the results were not good. They were Shimon, Akiva, Elisha, and another Shimon; students from a small yeshiva in Monsey who were sent to spread Torah “out of town” over the summer.

The first Shimon started at the swirly blue marble countertops at the home he was staying in. The home was beautiful, everything clean. He had his own room with a bathroom, also with marble countertops and a large shower with two showerheads. These baalebatim are rich, he thought to himself, very rich. Little did he know that wealth is not always what brings happiness. This Shimon was the first victim of the summer. He stared at the marble, and he stared at all the statuesque figures in the house too. When the man of the house returned from a week long business trip he found Shimon in the shower and killed two people. Upon him it is said “Do not gaze upon the marble and call it water, water. And do not gaze upon the shul’s MILF and offer to clean up the garage on Sunday while her husband in on a business trip in Singapore.“

The other Shimon met an even more tragic fate. He came across a book about Spinoza and read it. He went crazy. He now claims that God is a conceptual illusion we created to describe nature. He wears t’filin and davens, but he says we do this in order to belong to a social order, to fit in with the community. He even went as far as to claim that Saul Lieberman was a scholar, that intellectualism is not a sin, and that Torah makes sense if you think about it as a legend, full of good ideas and human wisdom. Rumor has it that he has applied to learn at YCT, but others say he will join the Peace Corp. and help humanity. Upon him it was said “What a waste of a good mind, he could have been learning all day. His sister will have a problem getting a shidduch.”

The story of Elisha is the scariest of them all. He was learning with a baalebos every evening. Some Gemarah, Sukkos I think. At one point in the learning Elisha brought down a question and answer that the Ritva brought on the sugyah. The baalebos challenged him and said, I don’t think that pshat makes sense. And then it happened, the greatest tragedy of the SEED program: Elisha had an original thought and shared his own opinion. Gevalt! Akiva intervened to stop it, but it was too late. Elisha broke the cardinal rule of SEED — he offered an original thought.

Akiva quickly called Reb Meir, the SEED program director, to see what could be done. But Reb Meir was not sure. And then tragedy stuck again. Rather than calling in the question to the rosh yeshiva, R’ Meir offered a suggestion about how they could resolve this issue. Akiva interrupted him midway and asked “Did you ask the Rosh Yeshiva what we should do, or are you suggesting this on your own?” The director was silent. Akiva lashed out at him “You see this is a virus! First Elisha has an original thought, and now you try to have one too!” Akiva slammed the cell phone on the table in disgust.  As fast as he could, he got into his rented Nissan electric car and took off to the airport, destination unknown.  Upon him it is said “Like a madman was that yeshiva bucher in the driven LEAF.”

Akiva was the only one who entered the Orchard in peace and left in peace. The SEED director and the three other boys perished, each in their own way.  There will be a SEED program next year, but it will be conducted via video teleconference with the bucherim sequestered in a dormitory over the summer, under the watchful eye of a mashgiach.

← Dear Heshy: The shadchan says I’m an aggressive driver
Letter to the editor: Why make fun of yeshivish people so much →

78 comments for “The Tragedy of the Four SEED Boys”