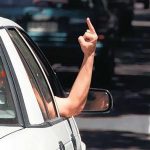 Just last night the shadchan called me to tell me it was over with a girl whom I was head over heels for, it seems that this is the second girl to reject me based on my aggressive driving. Is that fair? Am I at fault here? If you or readers can shed light onto my situation it would be greatly appreciated, I’m feeling a bit hurt at the moment, thanks for your humorous responses to other questions in the past.

Since you didn’t give me much information to go on, other than the fact you’re in the New York area, I’m going to make some quick assumptions. If my assumptions are wrong, you can disregard the beginning of the answer. New York drivers have to be aggressive, if you aren’t aggressive, you are going to get killed. If you aren’t aggressive, you are probably going to be waiting a long ass time to merge onto any highway, because no one is going to let you in. With that said, the girls you are dating are probably out of town types who don’t know from aggressive driving, because when you leave the New York area you can survive without being an asshole driver.I myself haven’t cut anyone off or used my horn in months.

If these two girls who rejected you for being an aggressive driver were in fact from podunk places where they never have to parallel park or tailgate someone with their brights flashing to get someone out of the fast lane, they are probably wrongfully judging you. They have violated giving someone the benefit of the doubt and should be severed from the Jewish people.

Chances are that if they are out of towners, they flew in to date you and didn’t really get to experience the regular New York driver. They are judgmental bags dicks and you should praise the Lord that they rejected you before you did anything stupid, like get engaged, because with the shidduch crisis on – if they are willing to go out more than 3 times, that usually happens.

Now let’s take it from a different angle, lets say you are a really aggressive driver, maybe a bit of a dickwad who deserves the finger a few times a day. Let’s say you are that guy, well if the girls were so full of middos tovos they would actually say “look you drive like a real dick, slow it down and we can go out again” instead of just pulling the cord with the shadchan. If I went out with a girl who was a real shitty driver and I really liked her, I would discuss her Asian lady driving skills with her. If these girls were really into you, I’m sure they would have looked past your dick driving and discussed it with you or the shadchan.

Now if you weren’t from New York (or Israel) and you were an aggressive driver you would have a real issue, because dick driving is the sign of impatience, hot temper, and the likelihood that you will get yourself into a fairly bad accident one day. You probably don’t notice every time you say “fuckin eh” under your breath as someone cuts in front of you and slows down, but your date probably does.

The real issue here is not to do with your New York driving skills or her thinking you’re an impatient dick driver, it actually has to do with her unwillingness to go out again. You see, any girl worth her weight in bikur cholim visits, chesed campaigns, and general good heartedness would have given you a second chance. No one does very well on first dates (fine if you’re a famous blogger they’re like putty in your hands), but in general a second date is a must. Contrary to popular thought, men get nervous too and sometimes they do stupid things like avoid getting killed by crazy cabbies in an effort to get their date to the hotel lobby in one piece.

Now that we cleared that up I just want to reiterate that a second date is almost always a must. I can be a douchey frummy and list off all of the folks who didn’t want to go on a second date and did eventually get married because someone convinced them to give the girl/guy a second chance, but I won’t do that.

Hope that cleared some things up for you.