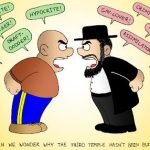 Hating Chabad: Creating false messiah’s are a no no and since no one has really vanished those messiah believers and we who hate chabad are such perfect Jews ourselves, we have a real justification to hate these people.

Hating the Gays: It clearly states in the Torah that being gay is assur, therefore hating the gays is not baseless hatred at all. In fact, it may even be a mitzvah to hate the gays, because everyone knows that if you hate the gays you must be a real hardcore Torah follower. Obviously, everyone hating on the gays has their basis in the Torah and since they keep the whole Torah perfectly we can honestly say that anything against the gays is not sinas chinam after all.

Hating the Charedim: Everyone knows that the true Charedi is breaking the Torah outright by adding to it, I’m not sure where it says in the Torah that women who wanted to daven with talis and tefillin were supposed to be attacked and therefore anyone hating on the Charedim must be a true Torah supporter. In fact, I’m willing to bet that almost everyone who hates the Charedim is practicing what we should call authentic Judaism.

Hating the Goyim: If they aren’t keeping the shiva mitzvos b’nei Noach, we can justify our hate of the goyim.

Hating women of the wall: You don’t have to be learning in a top yeshiva to know that it’s clear as day according to every halachic authority that women cannot put on tefillin or talis. It also clearly states in many seforim that such women are to be killed by stoning with chairs.

Hating Modern Orthodoxy: Modern and Orthodoxy do not go together, anyone seeking to destroy our mythological shtetl mesorah is evil and must be hated.

Hating non-Orthodox Jews: Of course they know the true way to practice (my way) and they have chosen to ignore the truth and distort it to suit their needs. The only way to bring them closer to my path is to hate them so much that they will become curious about the beauty of my derech.

Find our more on 4torah.com

← The Chumrah Song
One of the best emails in a while →