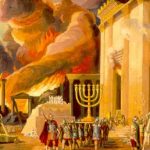 It seems that everyone talking about George Zimmerman, no one spoke about it over shabbos, yet as soon as shabbos was over it was suddenly on everyone’s mind. Today as I drove without any sound coming out of my stereo because I decided on these last two days of the 9 days to stop listening to music, all I could think about was Tisha B’Av and how George Zimmerman seemed to be more important than the most somber day in Jewish history. Not only were people preoccupied with the media hype, they seemed to think that arguing about it was going to help make it better in some way.

Since we all have no idea what really happened and those who support Zimmerman and those who don’t support him aren’t going to change their minds, I didn’t see the use in angering myself and others with such trivialities. It almost seems like Hashem created Mr. Zimmerman to take our minds off the task at hand, loving our neighbors and brethren without constantly trying to kick up the hate.

I’m not perfect, once in a rare while it appears that I harbor some hatred, I hate cilantro, white pepper, and hard boiled eggs – which appear to be on the menu tomorrow, maybe the ash will help drown out the taste and texture of them. In all seriousness, I hope that we start focusing on the major task at hand. There is a lot of hatred within the Jewish community right now. Israel seems like a ticking time bomb and the leaders there have only made it worse. In America we bicker about wearing hats on shabbos and whether or not age should matter in shidduchim, while thousands of Jews are marrying out. There’s no sense in hating someone because they aren’t on your derech. There’s no use in pushing our religious ideals on others, let’s lose some of the judging and be good to each other.

Just because someone is chassidish, doesn’t make them a woman hating thug and just because a woman is a rabbi doesn’t make her an evil person. Calling people names is not going to help, I wonder when it will be possible for all Jews, not just Orthodox ones to be apart of klal yisroel. When will we stop judging others for being more or less religious than us?

George Zimmerman may the OJ Simpson of our time, but that isn’t going to change the fact that tomorrow is our time to be somber and reflect on the far worse and crazier things happening in the world that could change the world for the Jews. Mourning the beis hamikdash and begging for moshiach is too abstract for most people I know, but mourning the Holocaust is fairly easy.