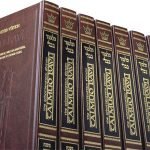 I like to think of myself as a self deprecating Am Haaretz, but amidst my amaratzus I’ve discovered that I can actually pick up a sefer and learn quite a bit. During my free time you can see me learning some mishna brura (my friends tell me I should learn aruch hashulchan), mesilas yeshurim, and the occasional gemara. I can just barely get by, but it makes me look frummer which in turn makes my case for wearing sandals and short shorts to shul better. One would think that amidst my complete lack of learning I would at least pick up an Artscroll gemera and improve my knowledge, but I can’t do it. I hate Artscroll, I almost feel that they’ve done a disservice to the Jewish community.

I’m sure you’re all going to give me that same old speech about all the great that Artscroll has done for the community, how many thousands of people now learn because of it, but my theory is that Artscroll is ruining the quality of Torah that people are learning. You see when I pick up an Artscroll “sefer” (in my heimishe world, we hesitate to elevate Artscroll to such a status, hence the quotes) I try to learn, but in the end I just read it. Are we trying to learn or are we trying to read. Is reading lishmah the same as learning lishmah? I guess it’s a good thing that I never learn lishmah, I always have ulterior motives, like getting girls, shabbos meals, and enough knowledge so that I can stop calling my off the derech friends for p’sak halacha.

In all seriousness, I rare see someone pick up an Artscroll and learn, they are usually reading and never do you meet people of the Artscroll ilk who can quote various gemara phrases out loud whenever you do something wrong. One of the only reasons I even learn gemara is to gather enough phrases that I can spew at BT’s who try to critique my lackluster ways. Imagine if I, the big Am Haaretz knew a bunch of phrases to dispute any rebuke? Gemara phrases are one of the best things about being frum, because there’s a response for everything.

For instance, someone we had over recently, told me that the next time someone told me that I could talk outside instead of in shul, I could just say mayim genuvim….something about stolen waters are better, not sure the exact phrase even though I tried to commit it to memory for one of those times. As of now, the only gemara phrase I can remember from yeshiva is “hamotzi mechavaro aluv haraya” and that doesn’t really do me any good.

I’m sure there are some cases, but most of the folks I have met who learn from Artscroll gemara’s seldom move beyond the English gemara thing. They also don’t know any cool phrases and they don’t learn in trop with yeshivish lingo and thumb dipping. What fun is gemara if you’re not going to scream at your chavrusa and learn out from here with a brilliant deep arching thumb dip?

122 comments for “I hate Artscroll gemaras”