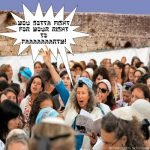 Pretty much the entire Jewish world is talking about Women of the Wall, they have either desecrated one of the worlds holy sites or made it holy by standing up for women’s rights, but I’m not sure that either are correct. Since when do we even allow women to come to the wall in the first place. Do women have a chiyuv to daven? We all know hashem is slow to even answer the prayers of men who daven without a minyan and at the wall, women are too far from a minyan to have their prayers answered. So basically all women who go to the kotel to pray are violating many laws pertaining to bracha l’vatala. They are also taking up space which could be used for men, men who actually have a valid chiyuv to daven.

I’m actually quite surprised that the Charedim haven’t taken this angle yet, in many neighborhoods the laws against women (in the name of modesty of course) are so strict that many stores have separate hours, sidewalks have separate sides, and women have to sit in the back of the bus. These are in reference to mundane matters, yet the holy kotel is still a coed affair. One would think that at such a holy site, the women would either be banned, or restricted to certian times.

Fact is, I’m kind of embarrassed that the one time I would agree with the Charedim on something (an actual issue of halachic nature) they are being very weak. They are weak in their resilience against the true forces of evil, women of the wall is just an excuse to get riled up for many people, but if they would look at the larger picture they would realize that women don’t belong at the wall.

In this case, the frum women who are not putting on tefillin or laining from the Torah are just as at fault. Are they really there to pray their hearts out? Why couldn’t they just do it at home? Do they actually think that praying yechidus at the wall is better? Why not send their husbands to pray and insert notes? Why not be a true baal habusta and tend to the home while your husband does the work that Hashem intended of him and not of you.

Find more information about banning women at the wall on 4torah.com

← Should age matter in shidduchim?
I hate Artscroll gemaras →

17 comments for “Women of the Wall is a sham”