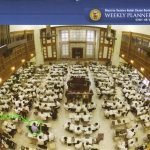 There was plenty of abuse.

There were (kenasim) fines, plenty of them, for coming late to shachris one too many times, forgetting to bring receipts from your mall visit to “prove” you weren’t at the movies, and the ever present “forgetting” to check out when you left the building. These kenasim were fairly abusive in nature, being that they were arbitrary, one dorm councilor would fine you differently than another. Then one of the rabbis could tack on a tax for those of us who were paying full tuition.

Have you seen the food they serve yeshiva guys, I’m not sure if I’d prefer feather filled burnt chicken wings over giving my rebbe a hand job, at least the hand job probably led to good scores on faher’s and lower lower kenas for skipping shuir. Eating those chicken wings wouldn’t get you much, besides the shits.

Night seder was one more form of abuse, as if it wasn’t enough that school ended at 6:20 in the evening, 2 hours later, instead of settling down to a good book or a session with the Sears underwear ads, they would force us to learn at 9pm at night for another hour. Sure, night seder always turned into one big bullshit session, but I always wondered how much abuse we could take.

Did I ever tell you about the abusive wake up call? About 30 minutes before davening they would put on the worst in Jewish music at the end of the hall, conveniently located by the bathroom. This music would be blasted, while our doors were slammed open and were yelled at by the vecker. The vecker would sometimes pour water on us and pull our bed covers off. It was really a terrible time.

If they suspected a letter (this was a long time ago) was from a girl, the Rosh Yeshiva would pull you into the office and open it and read it to you, talk about public embarrassment. I guess it’s a good thing that frum girls in the 90’s really had no ideas about sex and the letters were mostly harmless stories about getting caught at Prime Time or Playboy Billiards on a Saturday night.

Remember the next time one of your friends files a lawsuit against that lovable rebbe, that you too were probably a victim of abuse.

← Rationalist Judaism makes no sense
Dear Heshy: Why do you hate Charedim so much? →