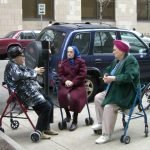 Being married has its advantages, laundry more than once a month, home cooked meals, and not having to get tested for STD’s every time my crotch starts feeling the fire, but one of the biggest disadvantages is that shul is infinitely more boring. It was a very hard thing for me to live up to, but I recently figured out that one of the only reasons I went to shul was to look at girls. Don’t worry folks, I still look at girls over the mechitza, label them, stereotype them, and place into neat little judgmental boxes for my personal enjoyment, but now I don’t care if they catch me ogling them during the lecha dodi look back – because the ogling is about as far as it can go. Being married has taken one of the joys of frum life and has made it almost non-existent.

Thank God all is not lost, I still find those extreme BT’s shuckling like violent old washing machines very entertaining, Artscroll continues to make good gadol novels, and the rabbi of my shul speaks for so long every shabbos, that some of it actually sinks in long enough for me to get some good chizuk out of it (usually in the form of blogging)

I remember when going to shul was almost a sport in my mind, especially when it was during singles shabbatonim, now it’s supposed to be all serious because I’m wearing a talis and have to knock over people at kiddush while trying to juggle two plates of cholent instead of one. Of course, one of the joys about being married is that I’m one step closer to becoming a dirty old man. Already, I have people in shul who’ll come up to me and say things that they could never say to me until I was married and “understood” some of their sorrow.

I should mention that kiddush becomes a more casual affair when you aren’t trying to “run” into girls or give them the eye throughout the whole affair. I can focus on the food and getting more guests (hachnasos orchim is my only strong point in life)

← The secrets of frum hospitality
Rationalist Judaism makes no sense →