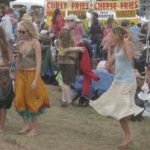 With the torches-and-pitchforks rhetoric aimed at Pop Chossid’s article on tznius still hammering in our ears, The Husband and I entered into the anything-goes wonderland of Rainbow Gathering last Friday, several hours before shabbos came in. I now think of the moment we pulled up to the Welcome/Info booth (i.e. two punkers with horrid body odor and questionable sounding directions sitting under a tarp) as the last moment of innocence I can claim in my life. All I’d known about hippie events up until that point were from movies and TV shows, and all that included was vague references to marijuana, music, and bathing in public fountains when the moment called for it.

My background is not rich, but I do come from a neatly laundered and carefully pressed family, with a healthy amount of pride in our fairly modest appearance. Basically I come from 9-to-5 people; and we jobniks tend to keep our clothes in good shape and on our bodies. The same could not be said for our fellow Gatherers. Not just dirty clothes; rather, the lack thereof.

Baruch Hashem, I do not feel easily threatened by other women, even when their stuff is all out in the open, even if that stuff looks like our similarities parted 25 lbs. ago, but this nudity didn’t even register. At all. There was no blip on the scandal radar whatsoever, it was just natural. There was nothing titillating, nothing sexual about it.

Now this was interesting, what with the Modesty Article War still being fought everywhere, finding myself in a situation where the word “tznius” was a truly relative term. There was no ticky-tacky standard of how thick your stockings are; we’re talking “do you hold of wearing a bra?” and even that would go way over most Gatherers’ heads. By stark contrast though, the women in our Jewish camp were strict in their tznius. Not a knee, not an elbow, not a married woman’s hair in sight!

I only occupy my husband’s tent, so I don’t know if the readily offered skin sightings caused any man to sin that weekend. I didn’t see anyone or any group descend upon the camp on horseback with emergency blankets for women, nor did I hear any battle cry of “Cover up!” from the Jewish camp outward to the Gatherers passing by on the road, or even to the topless woman that lingered within our own camp for a short time one day. I actually asked myself at one point, “Why am I still dressed tzniusly? I don’t think anyone even in the Jewish camp would treat me any differently either way, so…?” but I maintained my standards, because the question isn’t that simple.

Some Jewish communities (albethey temporary communities) can handle nudity, or near-nudity, to roll right past their homes, maybe even stop in for a smoke, and the brush with the outside word doesn’t rattle anyone. Other communities do things like painting over bicycle lanes so that scantily clad summer cyclists will know they’re not welcome. Some families have a standard of modesty they like to see kept because they’re trying to protect their women; other families have a standard they employ to protect their men.

← The tznius blame game
Help us save an OTD neshama →

36 comments for “Topless and Tznius”