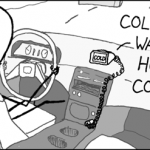 I wrote about kosher GPS‘s having a male voice and while you can get custom voices, you have to use the unfiltered internet for such avodah zarah and that’s just wrong. Besides, how on earth would one who uses a kosher GPS in the first place know from celebrity voices? It’s not like you can get Paysach Krohn, Lipa Schmeltzer or Rav Moshe in the GPS voice mix. One of the biggest obstacles facing kosher phone users and kosher GPS folks was the untznius kol isha that many poskim have ruled assur because it can tempt one to listen to real women’s voices. It was also deemed as a sakana, because if one were to have an emission while using the GPS, they may soil their seats, veer off the road, or not be able to find a mikvah to cleanse themselves due to the fact that the GPS or other device was responsible for their emission in the first place.

Luckily, Apple has finally agreed to all of the Chassidic protests as of late and will finally make a male voice option for its phones. Baruch Hashem, that we have such a heimishe voice that’s willing to go against the female voice on phones. The oilam should be proud of its success with Apple and hopefully Garmin will follow as well. No longer do kosher phone users have to live without GPS and soon we hope that GPS will eradicate this kol isha forever.

← And the most negative Jewish blogger of the year award goes to…
What’s the strangest Chinese Auction prize you’ve seen? →

18 comments for “Kol Isha on GPS will soon be eradicated”