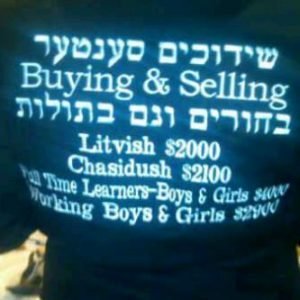 Back in the day it seemed like you couldn’t go a week without another blog, website, forum, dating service, or rant devoted to the shidduch crisis. I myself was never in the true shidduch market, because I was either too poor or too out of town to really fetch good value on the open market, so I never really had true gripes about the system, I was also getting laid regularly and I’ve noticed that sexual activity definitely gets you out of that shidduch crisis victim mentality. Is it possible that in the past year, that many frum singles have given up their celibacy or shomer negiah attitudes.

Is being shomer a quality that anyone even looks for anymore? Sure there’s the whole “I can get some, but I won’t marry her because I don’t respect her” hypocrisy in the frum dating world and the general dating as well. Maybe in this day and age, the shidduch crisis got so bad that folks stopped caring about superficial things like virginity and yichus. I doubt it, but one can still hope.

In my opinion the shidduch crisis was just an excuse and pains over the changing of society, it seems that the frum world moves at a slower pace than the rest of the world. Are we catching up to the secular world of the 80’s, when women started to get educated and become career minded and sometimes the breadwinner? Could it be that we just caught up to the social revolution of women in the workplace? Is it possible that everyone is going to become that much more goyishe and get married later in life and focus on other things before they decide whether or not they want the family life? It’s hard to believe, but for the first time in history, there are frum people who don’t want marriage and kids. Maybe all of the press on the shidduch crisis died down, once they came to all of these realizations.

43 comments for “Whatever happened to the shidduch crisis?”