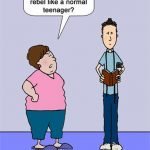 The flaming BT is one of the most interesting and talked about phenomena in the kiruv world. I’m certian that there are whole seminars devoted to the subject of people becoming too frum, too fast, and within the frum world these are known as Flamers. Donning a black hat and woolen talis kattan before one begins keeping kosher shabbos fully, is just one example of someone becoming a flamer. If you want to really practice the art of the Flaming BT, follow my guide and you shall too become the talk of the town. You could also read the book Becoming Frum, which is 200 pages devoted to the subject.

The flamer usually calms down a bit when they realize how stupid and annoying they have become, it’s just the post “beautiful and inspirational shabbos” stage, that is usually followed by the denial and debate stage, where the flamer becomes all knowing and starts to espouse whatever their rabbi is telling them to their friends, further alienating them from their former community and allowing them to transition into full fledged frumkeit.

The flamer is extreme, you can spot them from a mile away. Their style of dress, the way they talk, the way they bash and hate, it all has the look and feel of someone who’s just joined a cult. Funny thing is, they most likely have just joined the cult of Orthodox Jewry. Follow these 10 steps to become a crazy BT, which is a necessary phase in becoming a normal frum person:

1)Denial: The first step to being a flamer is denying your former life ever existed, you need to pretend that you either grew up frum or that the BT malach tapped you on the upper lip at Aish and made you forget all that pork, shiksa sex, and 4 day weekend fun you ever had.

2)Debate: You need to start debating things you know nothing about, this includes science, women’s studies, Israeli politics, and hilchos mesirah. To prove that you have really given up your former life, you switch from being a lifelong vegan, liberal, gay activist to someone who shouts at the top of their longs that vegans are against the Torah. Somehow, in a manner of 3 weeks you have changed your entire belief system including your politics. You also suddenly know everything there is to know about the worlds age, how it was created, and why science is nonsense. You also picked up somewhere that listening to secular music is assur because it puts you in the souls of non-Jews.

3)The dumpster: Almost every BT or convert has some story about how they threw away all of their clothing, music, and books upon becoming frum. You must do this, you must not think about donating your untznius clothing or jeans to anyone who needs them because you don’t think anyone should be wearing this stuff. You also throw away entire music collections and convince yourself that Jewish music is good. You start to tell people that Blue Fringe just like Phish and that Moshav is like Dave Matthews. If you’re a real flamer, you don’t even need such justifications, you merely bash all goyishe music and say it’s assur and filled with gashmiasdicke themes. Your book collection gets thrown out, except for anything your Rav or Rebetzin told you is “ok for now”. For some reason, BT’s never think rationally during this period and donating this stuff to goodwill or someone that needs it. As if it’s even assur for the goyim.

4)Davening: Just because you’re not exactly sure what the words mean and it takes you a million years to say the words, doesn’t mean you can’t have extreme kavannah. After all, you need to beg forgiveness for all of the sins in your past life that you now deny to friends (once you’re frum, you can also deny that God even knows) You also can’t seem to figure out the correct way to bow during shemona esrei and clopping selach lanu has to look like you’re trying to restart your heart.

5)Mussar: You can’t seem to understand why FFB’s don’t have the same passion as you and you need to share this with them whenever you get the chance. You need to go up to them in shul and ask them how they could come late and why they talk the whole time. You feel the need to espouse the views of your Rav (who is probably catering his advice to you) to everyone who will listen.

6)Family Disputes: You need to ostracize yourself from your family, it starts with the hot plate and microwave in your room and it ends with you refusing to sleep in their home because it’s treife and they are going to gehenom for knowingly violating the Torah. Sometimes it ends up being the grandparents who are most compassionate, they keep kosher in the home and like that you’re starting to learn Yiddish, but you too refuse them because they have a TV and read goyishe magazines. No family, besides your charedi cousins in France are good enough for you and it turns out that you’re probably not frum enough for them.

7)Name Change: The name change is usually later in the game, for some reason, folks with names like Katie and Bob don’t get around to figuring out their Hebrew name until someone calls them a “Harry” and they decide to do some investigating. I’m sure that every BT goes through a “Eureka” period when they realize that they may be espousing frummy views on molestation being handled by gedolim, but it doesn’t count until they have a frum name. You can see on Facebook, the baby steps that some go through when changing their secular name. It begins with the middle name, but real extreme BT’s insist on being called by their new name immediately, they won’t answer to their old name. This is another way in which BT’s can insult their goyishe parents.

8)Unfriending Time: Facebook has made becoming frum infinitely harder. It used to be that one visit to a friend of the opposite sex with the classic “I don’t touch boys anymore” was enough to end friendships, after all most guys are only looking for one thing in a friendship (I knew Manis and Orlofsky were right!) Nowadays, Facebook has made it harder, people take facebook so seriously that many BT’s end up opening a frum account and deactivating their goyishe account. Your true BT status is not really solidified until you only have frum friends who are members of your own sex. The true flaming BT doesn’t care about offending people and makes a big announcement about leaving Facebook or unfriending everyone who doesn’t make the cut. Remember, being a flaming BT is all about offending those who are close to you in an effort to bring them closer to frumkeit.

9)Hating other Jews: In your quest to become a full fledged frummy, you need to espouse your hatred of other frum Jewish groups for their wrong doings. If you went to Aish you learn to hate Ohr Someyach, zionists, and chabadnicks. If you’re chabad you can argue all day long about Rav Moshe’s heter for cholov stam not being good enough, you also know all about the Rav Ahron story involving the deaths of buchrim in Shanghai during the war. You also know all about modern orthodoxy and how it’s not really frumkeit. One of the first indoctrination tools of the cult you belong to is to disparage all other branches of the cult.

10)Self Hatred: In order to become a true BT you need to start hating other BT’s and wanting to become just like those same FFB’s that you bashed when becoming frum. Calming down a bit from your climax of flaming BT, you begin to ignore the mussar, have an amicable relationship to your parents, listen to instrumental rock, talk during some portions of davening, bow correctly for mogen avram, and reactivate your old facebook account.

← Ebay Yanks chelek in olam habaah auction
This Rabbi holds that murder cases should be handled by Gedolim!!! →

91 comments for “10 step guide to becoming a Baal Teshuva”