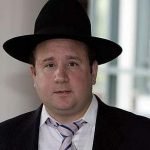 In honor of positive blogging week I’ve decided to write about being dan lehav z’chus, giving someone favorable judgement. Too many times do we jump to conclusions based on “news” stories, blogger fabricated lies, and a general willingness to jump on the bandwagon of negativity when someone us accused of something. I myself am guilty of this sometimes, I jump on the hate wagon and slam people for things I’ve seen on such sites as Failed Messiah or Vos Iz Neias, without confirming it with reliable news sources.

It could happen to anyone, I just never thought it could happen to my rebbe. Over the last few years as the off the derech community, anti-chassidim, and supposedly open minded yet frum Jews have been encouraging people to speak out against their abusers. These rarely confirmed victims are hailed as heroes and instantly enjoy a backing by the most negative, non-ehrliche yidden on the fringes of our community. My rebbe for whatever reason, was now the victim of one such individual who is making my former rebbe’s life a living hell.

Reb Yosef was one of the best in chinuch in Lakewood, everyone liked him and he did the best he could as rebbe and a person. He was a tremendous baal chesed, donating his time to bikur cholim, tomche shabbos, and hatzoloh. He was also actively involved in tzedaka, he donated huge amounts to many of the yungeleit in Lakewood, anonymously. I was very close to him and remained throughout the years.

I find it very unfortunate that someone could put my rebbe through such harm, but I wonder if their gain is “worth” it? Even if hypothetically speaking, he did do such acts, they were so long ago and his love of klal yisroel should surely outweigh one or two moments of weakness. Sure, we have all succumbed to the yetzer harah once or twice, should we suffer publicly due to such rare sinning?

While I am on the point, the folks who are claiming my rebbe sinned have sinned gravely by being moser a fellow Jew to the authorities. Never have I heard a proclamation from the gedolim giving a heter to anyone to be moser another Jew. Not only has this Yid violated severe halacha, molestation is not even against halacha. Unproven, unlikely to be proven molestation is hardly against anyone. Why try to get revenge at someone who never hurt a fly? How could you call yourself a good Jew, when you are causing so much hurt and pain to Reb Yosef and his family?

This is just one example of how one could try to focus on someone’s numerous positive traits, rather than one negative.

21 comments for “Why are we always focusing on someones negative traits?”