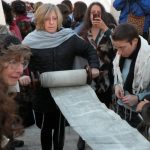 A Woman at the Wall; A Bystanders Experience of the Rosh Chodesh Sivan events

The author who sent this to me wishes to remain anonymous. I was on the way back from Tahoe and Yosemite so I wasn’t even aware that this was happening.

(This piece was written as a response to the events that happened the morning of Rosh Chodesh Nissan 5773 (May 10, 2013). A summary of the events can be seen here.)

I woke up at 4:00am and quietly tiptoe out of my room, trying my best to not disturb my roommate. I sneak into the bathroom to change, I grab a bottle of water, and head out into the still dark night. Arab muezzins sing around me in their early morning prayer calls as I wait to meet a friend at the front gate. She soon showed up and quietly we stole out of the gate and began to walk quickly in the direction of the Temple Mount.

The Jerusalem air was still cool and felt good against our faces and we walked with a purpose in the middle of the night. We approached the Kotel from the south and as the sky grew lighter climber hundreds of windy stairs to make our wait to the old city. As we drew closer we could see other groups of yeshiva boys, seminary girls, b’nai akiva groups, approaching the Kotel with the all same intention in mind.

We walked single file through the narrow winding streets of the old city passing through a parking lot, in front of the Zilberman Yeshiva, trying not to slip on the smooth Jerusalem stone. It was close to 5am and approached the wall; we stood in the back of the plaza, praying. Safardi minyans shouting out their prayers in a sing song tune. Askanizi chazzanim trying to chant loud enough to be heard. The buzz of multiple minyans resonated around us. However, come dawn, suddenly, the voices of all the minyan’s at the Kotel unite to say “Baruch Ata… Goal Yisrael” and the plaza falls silent as thousands of people begin to say the silent Amidah.

I stood there in the morning air. The sun was just rising above the Kotel and shedding its light on the buildings behind us. All I could here were the night sparrows, still out, screeching as they flew in circles above our head. Pigeons were lined up on the top of the Kotel, silhouetted as the waddled back and forth. Several thousand Jews were silent as each sent our personal prayers up to the heavens.

About seven minutes later the silence is broken. The first minyan begins its chazara (repetition), a second, a third, soon the plaza is buzzing again. Soon Torahs start popping up all over the plaza. I watch as various minyans pull out their torah and see at least five Hagbah’s occur as each minyan shuts their Torah to put it back.

The minyan I am with davens slower and soon we Hallel well after other minyans. I came here mostly to experience Hallel, a joyous praise of Gd that we sing on special days of the Jewish calendar. The songs of Hallel are beautiful and inspiring. I am leaving in three weeks and this will be my last opportunity to sing it at the Kotel. We begin.

The first thing I notice are the cameras. We are dancing for Hallel, a group of us join hands and sing jumping and twirling in a circle, joining together as one in song and dance. Some photographers come over and take pictures. They want pictures of people dancing at the Kotel, I thought, how nice.

After a few minutes of dancing, we split apart and resume prayers. Most of the other minyans have finished, as ours takes it’s lazy time adding in plenty of humming and chanting in between songs and prayers. As I retrieve my siddur from the pile that was stacked on backpacks when we all began dancing, and peer at the words I peer up for a second. I am standing near the Mechitza and suddenly see hundreds of men’s faces pop up over the desperately trying to get a glance at something happening behind me.

Against my better judgments, and my mother’s voice inside of me – who always urged me not to look at spectacles – ‘it’s makes them worse’, she told me. I turn to see what they are looking at. I see hundreds more men pressed up against the fence between the main Kotel plaza and the wall plaza, I see cameras, commotion, and people. Lots and lots of people.

It’s the Women at the Wall, I thought, they’re probably getting arrested, I thought. I knew they came each month to the wall and got arrested and I figured it was irrelevant to me, and turned back to my prayerbook. Let me continue praying. It was much more difficult to concentrate with men staring over the mechitzah and hundreds of women in the plaza with their backs to the Kotel to trying and see what’s going on. I peer over at the men’s side of the Kotel and see that most of the men had filtered out to the main plaza. What was an hour ago a packed plaza was half empty, and the women’s side – which wasn’t even half full before suddenly began to fill with people.

There’s shouting and yelling, and pushing and shoving. The minyan I am with tries to sing louder to overcome the noise. I sing with them. The shouting behind us gets louder. We sing louder. The spell from the morning suddenly is broken. I feel like I am taking part in a political debate and feel used. I came here to daven this morning – not to debate.

I decide then to finish Hallel on my own. I quietly reciting the words that I usually enjoy singing. I glance around at the people around me, no one is davening any more, everyone is craning their necks to see what is going on. I watch a group of security guards run to control the crowd. It’s barely 7am and I decide to leave.

Girls are flooding the Kotel plaza now. I don’t know what is going on. I elbow my way through hundreds of Beis Yaakov girls who stand around talking and milling, also trying to see the excitement on the other side of the plaza. I don’t care about the excitement. All I am trying to do is get out of their as quickly as a can.

On the steps up from the Kotel I can see the masses of people. I turn my back on them and make my way up the stairs. I am still passing bunches of Beis Yaakov girls making their way to the Kotel. I have never seen so many before, I don’t know why they are there. I briefly wonder if there’s something special about this rosh chodesh that makes girls want to visit the Kotel more.

With relief I reach the gates of the old city. Exhaustion from three hours of sleep, an hour walk to the Kotel, and two hours on my feet afterwards is starting to hit me. I am left with a bad taste in my mouth. I have still not said Mussaf – the environment at the Kotel was not one that I could talk to Gd to. I feel an itching need to pray but have nowhere to do it. I need to go to the shuk to buy food for Shabbos, I need to pray, I am tired, I am hungry, it’s beginning to get hot out. I begin to wish I never came.

I have Jewish friends ranging from reconstructionist to charedi, with stops at every denomination in between. I have female friends who put on tefillin every day, and female friends who won’t wear anything skirt above than their ankles. I fully realize that each person has their own way of serving their creator and do my very best to support and understand that people have different needs; even when they clash with mine. I believe that anyone trying to serve Gd should be respected, even if they are doing things that I don’t believe it.

Nonetheless, after this morning, I am left with an uncomfortable taste in my mouth. I am upset at the people who decided that the Kotel, our most holy place in the world, is the correct forum for a political debate. I do not think that the people who threw garbage at the women were correct in doing so. I also do not think that the women who showed up at the wall knowing full well that they would incite hundreds of people to throw garbage at them were right in doing so either. Our shuls are not our political forums, all the more so, the Kotel plaza should not be either.

If people feel that this debate is one that is important to be had – go ahead, I am in support of communication. However, do I think that both sides are acting a little bit brickheaded? Yes. I believe that both the Women at the Wall, and the cheradi men who are opposed to it both have legitimate reasons why they have opposing opinions. Do I know the right answers to these questions? No. I think they are difficult questions – but ones we should be grateful to have. If B’nai Yisrael has reached the point where some of the biggest arguments we have are about a hashkafic nuances; I think that is amazing, that is a real luxury. That being said, now that we have reached this point – let us not have it tear us apart.

Our Kotel is not the white house lawn that we should picket on. The plaza shouldn’t be a place where anyone goes to incite spite or disagreements. Disagree with the policy, but not at the site itself. It’s the closest physical place where we can reach Gd. Let us go there to pray as individuals and as a nation. Please don’t let our hashkafic differences take that away from us.

79 comments for “A Woman at the Wall; A Bystanders Experience of the Rosh Chodesh Sivan events”