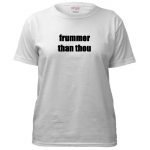 I’m a patchwork Jew.  I’m a collection of memes and tropes and minhagim.  I’ve clearly gotten more religious over time and have taken on things I never would have thought – tearing toilet paper before Shabbos?  But I still identify as a moderate.  I’m amazed by the breathless tales of the uber-observant.  To let you know how Seriously they take their mitzot: “so then I realized I wasn’t going to make it home by Shabbos so I pulled off the highway and parked in the worst neighborhood in the world, stashed my keys under a crack hooker, and then started the 45 mile walk home while gangs are shooting at me.  Uphill.  In the snow” or “… and I opened the refrigerator and the light popped on.  I was stuck.  There wasn’t a [non-Jewish person] around.  Everything melted, there was a river running through the kitchen…”