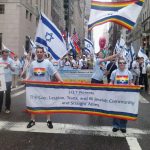 Orthodox Jews in Israel celebrated a new app that works on kosher phones, the app is designed to warn drivers when they are coming upon a gay mob. Many unfortunate incidents happen in Israel when the Ultra-Orthodox happen upon gay mobs, so someone bright enough to create an app to warn of such abominations is being called a hero by many Charedim today. The app also warns drivers when they are accidentally driving into a gay neighborhood and gives them options as to how to escape the tumah (impurity) quickly without having to don bags.

Originally, the app was designed to warn of Arab mobs, but many in the Charedi community are more fearful and angry at the gays than the Arabs and so the app was changed to meet their needs. FS News has been told that a sister app is being developed to warn drivers approaching any mobs of scantily clad women. For now, many drivers will finally be able to avoid the gay mobs that have been polluting Israel.

← Imagine an Off The Derech Utopia
Fox news Defends the constitution: Some of the time →