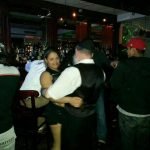 A modern, Orthodox, Jewish couple, preparing for a religious wedding, meets with their rabbi for counseling.The rabbi asks if they have any last questions before they leave.The man asks, “Rabbi, we realizeit’s tradition for men to dance with men, and women to dance with women at the reception. But, we’d like your permission to dance together.”“Absolutely not,” says the rabbi. “It’s immodest.Men and women always dance separately.””So after the ceremony I can’t even dance with my own wife?”“No,” answered the rabbi. “It’s forbidden.”“Well, okay,” says the man, “what about sex? Can we finally have sex?” “Of course!” replies the rabbi. “Sex is a mitzvah (good thing) within marriage, to have children!”“What about different positions?” asks the man.“No problem,” says the rabbi. “It’s a mitzvah!”“Woman on top?” the man asks.“Sure,” says the rabbi. “Go for it! It’s a mitzvah!”“Doggy style?” “Sure! Another mitzvah!”“On the kitchen table?” “Yes, yes! A mitzvah!”“Can we do it on rubber sheets with a bottle of hot oil, a couple of vibrators, a leather harness, a bucket of honey and a porno video?”“You may indeed. It’s all a mitzvah!”“Can we do it standing up?”“No.” says the rabbi.”“Why not?” asks the man.“It could lead to dancing!”

Carlebach Davening: There’s a good reason why the yeshiva world generally doesn’t hold of Shlomo Carlebach and that’s because he’s responsible for 90% of the mixed dancing that occurs during davening. Without Carlebach, kabalas shabbos wouldn’t be known as a time to get some action while circling the bimah with a bunch of other renewal hippies at Isabella Freedman. This is also the reason that many frum shuls will have a Carlebach shabbos once a month, but skip the dance around the bimah.

Supporting the Gays: Chances are that if you support the gays, you’ve also started to neglect other parts of the Torah that are blatant, such as the grave sin of mixed dancing, so grave is the sin that Moses cursed the Jews for mixed dancing at the Golden Calf. Do you think he would have broken the luchos if there was merely a mechitza separating the idolators? Also, at Gay parades there tends to be a lot of mixed dancing because the gays are so desensitized to feelings between the sexes that it results in unrivaled debauchery.

Wearing Themed yarmulkes: Look, if you think that God and Sponge Bob are both part of the shechina, you probably don’t think twice when your supposedly modern orthodox cousins throw a wedding with mixed dancing. You probably also wear a yarmulke when you’re mixed dancing and that’s a double aveira – due to maris ayin and people thinking that mixed dancing is ok if you hold of it.

Healthy Kiddush: If your shul has a healthy kiddush, it has a very high chance of not being frum. Healthy kiddushim tend to have a lot of abominations due to the amount of bug intake, plus they also tend to have low mechitzas, lack of yiras shamayim and women with fully uncovered hair. When ervah is showing, it’s not so far down the ladder to mixed dancing.

Talking to girls when not in shidduchim: If you’re a guy and you have real life experience with girls (naked chat rooms are not real life) than you’re prone to be a victim of drive by mixed dancing, you may be walking with a girl and hear some dance music coming out a Bresslov music mobile and lose all control of your faculties.

Staying single past 25: If anyone truly believes that older singles (the one’s over age 25) are not touching one another, they are very mistaken. After age 30 they are likely to admit to touching the opposite sex, because they have become accustomed to such abominations in their singles communities. Unfortunately, the likelihood of mixed dancing is almost guaranteed, due to the bar scene and prepaid Friday night dinner scene.  Even though many of these frivolous singles joke about things leading to mixed dancing, they have all partaken in this graven act.

Using plants for mechitzas at weddings: Just because you have separate dancing at a wedding doesn’t mean there won’t be a revolution of sorts. I’ve seen with my own eyes as people have shoved the black hatters out of the way and knocked down the flimsy plant mechitzas. Then, to the shock of everyone especially the shviggers on both sides, the chosson and kallah started dancing to the neginah orchestra’s version of Apple Bottom Jeans.

Women of the Wall: Don’t let their sly marketing fool you, the entire point of women of the wall is to get rid of the mechitza and have mixed dancing at the koisel. As we have seen in every other instance of women’s empowerment and freedom, religion is quickly thrown to the wayside and free love and mixed dancing in fields of daisy’s like we’ve seen on Lipitor commercials will be the norm.

Happiness: We all know that the whole mixed dancing thing was popularized in Fiddler on the Roof, the only reason that it ended up in mixed dancing was due to happiness, if they were in Kelm, Novardok, Slobodka, or any of the other mussar yeshivas they would have seen that the true way to live a Torah life is with sadness and degradation. Leaving the shtetl, material wealth, and this supposed happiness have all led to simchas that are lavish and openly happy.

Mixed playgrounds: I never understood why playgrounds were mixed, everyone knows that children learn everything from the time they are young and I could never figure out how they reacted when at age 4 they were suddenly separated in every aspect of their lives besides the playgrounds. In many frum neighborhoods the men and women walk on separate sides of the street, eat in separate rooms, and even have sex through glory holes once the wedding night is over, so why the mixed playgrounds. Thank God some people have sought to change this dangerous practice, but in hotbeds of mixed dancing like the Upper West Side and Tenack, the playgrounds are not only mixed, but they aren’t even 100% Jewish.

Other things that could lead to mixed dancing:

Women eating in the sukkah on succos

Find out more about mixed dancing on 4torah.com

25 comments for “10 things that could lead to mixed dancing”